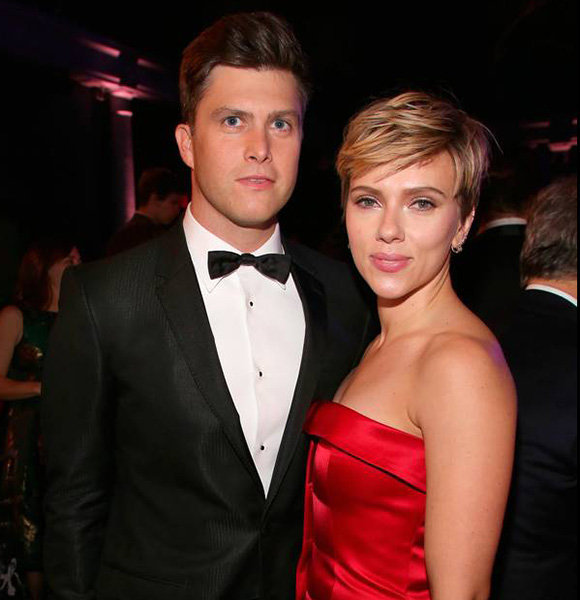 Who doesn’t like a good laugh? Well, everyone does.

In a dating pool, it is often said that a funny guy cannot land a girl. Instead, he gets friend zoned. But proving everyone wrong, funny man Colin Jost snagged the most beautiful girl in the world, Avengers star Scarlett Johansson.

How Did He Meet His Girlfriend, Scarlett?

Colin and Scarlett's romance is one of the Bohemian affairs of Hollywood. Well, she is one of the sought after A-listers, whereas he is a working comedian. No wonder many think his girlfriend is pretty much out of his league.

Nevertheless, the duo crossed each other's paths in 2006 when Colin was a writer at SNL and Scarlett was hosting the show. But, the pair only started dating 11 long years after their first meeting. Colin Jost smiles with his girlfriend Scarlett Johansson at Emmys on 17th September 2018 (Photo: Invision for the Television Academy)

Such an unusual timeline of their relationship confirms people’s theory that love happens when the time is right.

During the eleven long years, Scarlett fell deeply in love twice and faced two failed marriages. She was married to Deadpool star Ryan Reynold from 2008-2011 and to French Journalist Romain Dauriac (2014-2017). From her last marriage, she has a daughter named Rose Dorothy Dauriac.

Finally, stars aligned for the pair when Scarlett guest starred on SNL on 11th March 2017. The lovebirds have to thank SNL star Kate McKinnon, who played Cupid and set the singletons on a date.

On 21st May 2017, the comedian of age 36 and his movie star girlfriend's dating news broke when they were spotted kissing at the May cast party of SNL. Proving the rumors true, the couple stepped out in each other arms to make their debut at American Museum of Natural History Gala on 20th November 2017.

Colin was pretty open about his relationship as he declared he had a girlfriend when his SNL co-star Leslie Jones quizzed him about being gay in their comedy bit on weekend update. Well, the standup comedian and his lover have been going strong ever since, and there is no plan of getting married just yet.

After two years of casual dating, Colin and Scarlett's relationship has turned serious.

The couple are happily engaged and might even get married soon. Talking to the Associated Press, Scarlett's rep Marcel Pariseau announced the news of their engagement.

The news doesn't come as a surprise to the duo's fans, who have been hoping to see the two get tied in a nuptial knot. However, neither Colin nor his new fiancee has mentioned any plans for a wedding.

The upcoming marriage will be the third time for the Don Jon actress; whereas, Josh has never been married before. His relationship with Rashida had ended just as fans thought they were about to exchange the wedding vows.

Comedian Brother, Family, And Net Worth

Comedy seems to run in the Jost family as Colin’s younger brother Casey is also a comedian. His work credits include an appearance in movie Staten Island Summer as Officer Wankel and producer in Impractical Jokers. Besides, he served as a writer on Late Night with Jimmy Fallon in 2010.

Talking about the comedian's family, Colin's father Daniel A. Jost was a teacher at Staten Island Technical High School while his mother Kerry J. Kelly was the chief medical officer at New York City Fire Department.

It is the blessing of his parents that he got into Harvard University for his undergraduate education. Right after his graduation, he got his job as a writer in SNL. His career has been serving him well as he has a net worth of $6 million.

Colin almost lost his job back in 2016 when he made an offensive joke on the LGBTQ community. The comedian is yet to provide an apology for his statement.