Phil Donahue, At Age 82 With Wife Of Nearly 4 Decades, Where Is He Now? 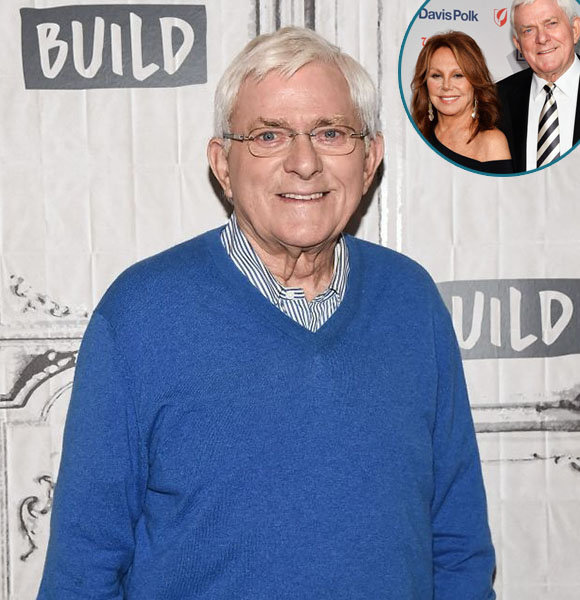 Pioneer of the talk show, Phil Donahue entertained the audience with his talk show, The Phil Donahue Show, for almost three decades. Honoring his long contribution to the show, the 81-year old host was honored with respect and achievement award.

And if there's award for longterm marriage, the host should surely grasp one for he has been taking for almost four decades now. From meeting his famous wife Marlo Thomas in the show itself to being the entertainment power couple, Phil has weaved his story of a marriage in between!

The talk show host, Phil Donahue has taken his married life for more than almost four decades and seemingly, there's a secret to it. As per Phil's wife's words, giving less criticism has taken their bond still strong with passing time.

The Phil Donahue Show host first fell for the beautiful actress Marlo Thomas after she made a guest appearance on his show back in 1977.

See Also:-  Kate Snow's Married Life With Her Husband And Children, What is Her Net Worth And Bio?

He had been living the single life for the two years when he felt the connection with Marlo. After dating for three long years, the couple fell deeply in love with each other that bind them into the married life. The couple married in 1980. Well, with their married life of almost four decades, the couple is going strong with their relationship and Marlo stated that his supportive nature is what ties the pair together for these long years.

However, she was not his first wife as he was previously married to Marge Cooney in February 1958 until the couple divorced in 1975.  He shares five children with his first wife namely: Michael, Kevin, Daniel, Mary Rose, and James.

After his divorced with the first wife, he raised his four sons as a single parent. In an interview with Today in 2017, he revealed that he made his son capable to attend High schools freshmen as he raised them since they were six graded.

He further explained that he had no idea about raising a child, but it is said that once a man falls in that situation, he must do or die!

And slowly but steadily, he learned and also hired a Yugoslavian nanny whom he described as a very sweet and nice woman. Mesmerizing the old beautiful moment with his children, he had to face the tragic moment of his life. He lost his youngest son, James Donahue to an aortic aneurysm at the age of 51 back in 2014.

His wife who maintained a good relationship with his children expressed nostalgic memory of late James to friends quoting her stepson as:

“a great light in our family, a funny character and an independent spirit.”

Even with their long married life, the couple does not share any child together. The Clever Little Lies star seems to have taken her step-children as her own child.

The host of one of America's longest show, The Phil Donahue Show entertained the audience for the 29 long years on National television in American history. The show was the first of its kind to discuss specific taboo topics, many related to women’s health and wellness.

After retiring from the show, he returned to television with his show Donahue on MSNBC in July 2002. But the channel canceled the show on February 2003 and it was reported that he was fired from the show for telling the truth about the war.

He had been enthusiastically entertaining the audience for almost three decades but it's already been a decade that he has retired from the entertainment industry.

On the National TV talk show day, after keeping his existence in illusion, he appeared on the Megyn Kelly's talk show The Today Show in October 2017, which he used to work on in between 1979 to 1988. He disclosed the unraveled things about his personal life. Though his wife has been entertaining the audience still at the age of 80, as of now, he seems chose to live in peace.

Moreover, with his long-dedication towards the hosting job, he earned the average salary of $58,112, which counts his net worth of $ 25 million whereas, his wife who is still dancing into her professional life holds the net worth of $35 million.