By LRU Writer | On: April 05, 2019
AC/DC drummer Phil Rudd, age 64, needs no introduction...From being the highly talented member of the Australian hard rock band to getting embroiled in a controversy, he fits all the bills of the ultimate rockstar...Since the departure from the world famous band in 1983, he returned back to his claim to fame after twelve years...How is he faring in his professional and personal life? On Paul’s Wife And Kids... 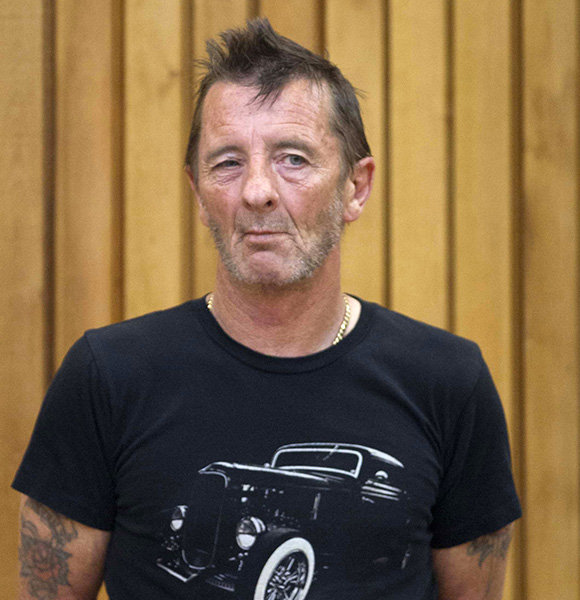 AC/DC drummer Phil Rudd, age 64, needs no introduction. From being the highly talented member of the Australian hard rock band to getting embroiled in a controversy, he fits all the bills of the ultimate rockstar.

After his departure from the world famous band in 1983, he returned to his claim to fame twelve years later. How is he faring in his professional and personal life?

On Phil's Wife And Kids

The World famous rocker maybe an A-list celebrity but, he has somehow managed to keep his personal life out of the limelight. All because not much is known about his former wife, Lisa O'Brien.

Phil and Lisa married in 1983, and four kids later, they divorced in 2006. Besides kids with his ex-wife, Phil has two sons named Tommy and Steven from his relationship with a French woman.

The secrecy around his children is also commendable. His kids mostly remain in the shadows except for daughter Lucia, who is more open than the other children. Well, she posted about going to the Grammys with her dad on her Facebook in 2015.

In spite of his failed relationships, Phil was busy with his kids and living the life of a musician on the road. But, his active life caught up to him when he went through a health scare after suffering from a heart attack.

While ailing from the massive attack, he found solace in his ex-girlfriend from 30 years back, Michelle Cutelli. Incidentally, she was also undergoing treatment for a lump in her breast. The reunited former lovers had earlier dated for a year before parting ways.

However, the second time also ended in heartbreak as Phil returned to tour around the world. According to the photographer, Phil broke up with her over a text.

On His Net Worth And Bio

Phil was born on 19th May 1954 in Surrey Hills, Melbourne, Victoria, Australia.

Always keen on music, he got into AC/DC by chance. The drummer of height 5 feet 6 inches(1.68 m) was accompanying his friend for the addition of a drummer but, ended up auditioning himself. Phil Rudd in his element with drums ( Photo:philruddmusic.com)

The band liked his drum skills so much that they hired him. Thus, Phil began his claim to fame in 1975.

But, the considerable fame and success got into his head, and he got fired from the prestigious band due to pot smoking, irresponsible behavior with women and disagreement with band members in 1983.

For You:- Ron McGovney Wife, Net Worth, Now

In spite of his bad behavior, the band still respected his skills. Thus, they gave him a second chance by hiring him in 1994. Alas, second time also didn’t work for him as Chris Slade replaced him in 2015 after he ran into legal troubles in New Zealand.

Well, his brush off with the law didn’t affect his vast net worth as he boasts $60 million.