By LRU Writer | On: March 31, 2019
From being bullied at school for having English layered accent to becoming one of the greatest players of the NBA, Ray Allen has come a long way...The former Miami Heat player officially retired from his high profile basketball career in 2016. He has since been living a low-key life... 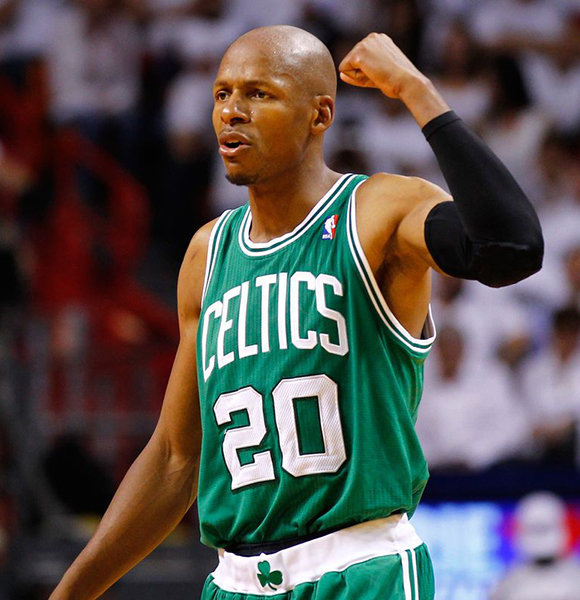 From being bullied at school for having English layered accent to becoming one of the greatest players of the NBA, Ray Allen has come a long way. The former Miami Heat player officially retired from his high profile basketball career in 2016. He has since been living a low-key life.

On His Wife And Kids

Ray has a loving wife and a bunch of kids. He started dating his wife, Shannon Walker Williams in 2004. After a steady relationship of four long years, the couple tied the wedding knots on 16th August 2008.

Apart from being the basketball star’s wife, Shannon is a star in her own right. A celebrity chef, she runs a healthy fast food restaurant in Florida.

While still in college, Shannon was a founding member of Shades along with Danielle Andrews, Tiffanie Cardwell, and Monique Peoples. The Northeastern University alum released her self-titled album with her group in 1997. Although the lead single Tell Me (I’ll Be Around) peaked to number 50, the group couldn’t sustain and split in the same year. After a failed music career, Ray’s wife tried her hands on acting via films Girlfight and Spike Lee’s Bamboozled. Incidentally, many assumed it was the Spike Lee connection that brought Shannon and her basketball star beau together.

Well, Ray had famously starred in Spike Lee’s He Got Game as Jesus Shuttlesworth: the role even gave him the nickname of Jesus. Though the assumptions o their meeting are ambiguous, the couple has a strong bond.

Moreover, they boast four kids; Walter, Walker, Wynn, and Wynstan. Ray also has a child from his previous relationship with a high school girlfriend.

In November 2017, fans were shocked when a person named Bryant Coleman filed for a restraining order in court for stalking. According to the accuser, he was in a three years relationship with the former Boston Celtics star.

Ray vehemently denied the charges. Instead, he blamed Bryant for catfishing by pretending to be various women. Things cooled down when the gentlemen settled their issue outside of court. But, Bryant broke the settlement by talking about it on social media. Nevertheless, he eventually dropped the charges in December 2018.

The gay rumors and the court visits didn’t affect the NBA champ’s colossal net worth of $100 million.

A court case couldn’t hamper the career of the best three-point shooters of all time. His stint with Milwaukee Bucks, Seattle SuperSonics and Boston Celtics has credited him eye-popping net worth.

While Ray tastes success now, a young Ray never imagined such rewards. An army brat, he had a different accent due to constant traveling with his army father. So, he was mocked for his accent in high school.

But, the lad - blessed with height and weight 6 feet 2 inches (1.96m) and 92 kg respectively - silenced everyone in the basketball court with his skills.

Now, a retired player with credits like winning two NBA championships and an Olympic gold medal as a member of the 2000 United States men's basketball team, Ray’s wealth is very well deserved. Off the basketball court, he has a foundation named Ray of Hope Foundation through which he does his philanthropic work.