By LRU Writer | On: December 29, 2019
Rebekah Vardy said her wedding vows among their friends...Her first husband was a man named...her husband relishes a net worth of... in terms of height,she stands... announced the news of her pregnancy on...has been through two failed marriages and a short-lived relationship with 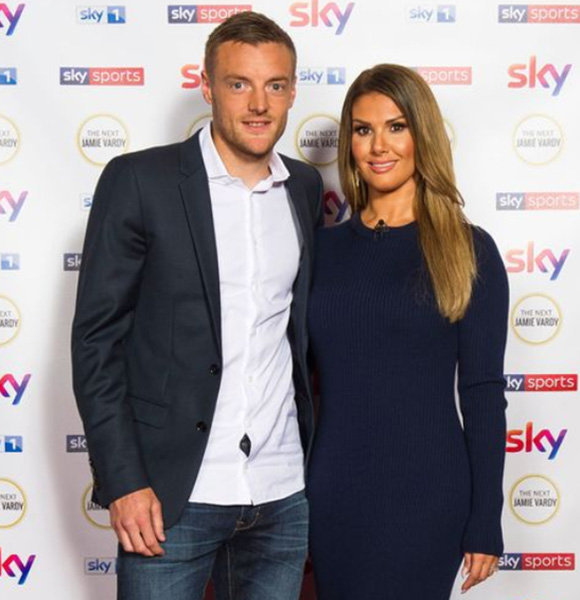 The reality star is married to Jamie Vardy, one of the leading and established soccer players in England. Her husband was even honored with Fleetwood Town's Player of the Year title consequently in 2011 and 2012.

She first met him in 2014 while working as a nightclub promoter and party planner. During their first meet, Jamie was a client as Rebekah was hired to plan and organize his 27th birthday party.

They eventually started dating the same year but didn't rush into marrying soon since her partner was not in favor of getting married. As per her husband's interview with Hello magazine in 2016,

"Even when Bex and I first got together I told her it (marriage) wasn't for me."

However, her lover changed his mind realizing that the marital bond would strengthen their relationship even more. So, on 25th May 2016, they said their wedding vows among their friends and closed ones. Rebekah Vardy & wife Jamie Vardy take a picture with singer Louis Tomlinson during their wedding on 25th May 2019 (Photo: hellomagazine.com)

The pair chose Peckforton Castle in Cheshire as their wedding venue and several notable stars including One Direction's Louis Tomlinson and rapper Tinchy Strider made it to the guest list.

Rebekah's marriage to soccer star Jamie isn't the first one for the reality star. She has been through two failed marriages and a short-lived relationship with another soccer player.

Her first husband was a man named Mark Godden whom she married in 2006 at age 19. Although the marriage lasted only six months, it resulted in the birth of her daughter Megan.

Likewise, the actress's second marriage was to Steve Clarke, her boss from a previous workplace called the Timeshare Company. The marriage too ended soon, and in 2007, Rebekah started dating soccer icon Luke Foster till 2010.

Also, she shares a son named Taylor (born in 2010) with Luke. With Jamie, she shares two children altogether, a son and daughter. Their daughter Sofia was born in December 2014 whereas her son Finley arrived in the world in 2017. As of December, she is pregnant with her fifth baby and eagerly awaiting her new addition to her family. She announced the news of her pregnancy on 27th August 2019 through her Instagram handle.