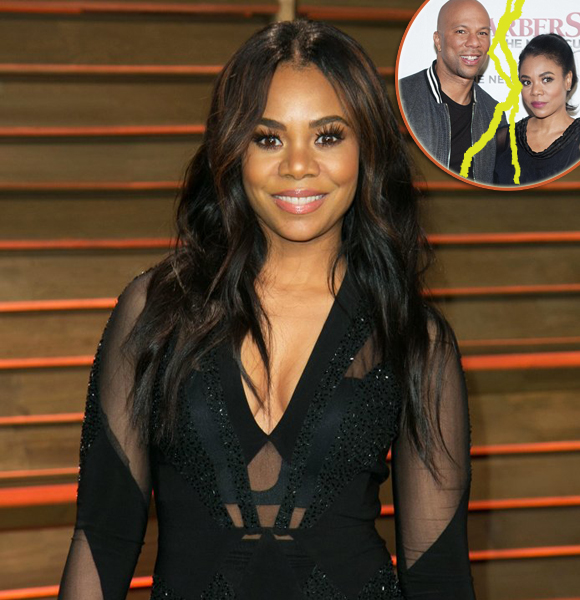 American actress Regina Hall, was once linked with a co-star, but that alleged relationship happened to be wrong.

Although the link up proved to be false, it hinted at another probable special person present in the life of Regina a boyfriend or a husband, perhaps?

Well, the question now arises, is she sharing a married life with her special person? Well, let's get to the point!

Who is Regina Hall's Boyfriend?

Regina has cemented her name in the hearts of many. And it comes as no surprise if she is dating one of those, may it be her co-star or someone else.

The same was the case when she had a link-up with her Barbershop: The Next Cut co-actor and rumored boyfriend, Lonnie Rashid Lynn Jr., in 2016. Regina Hall with Her Rumored Boyfriend and Co-actor from Barbershop: The Next Cut (source: dailymail.co.uk)

The story of link up hit the headlines after a source claimed about them dating. The source proclaimed,

“Regina wasn't interested in dating a fellow actor. She's always shied away from idea of being with one of her co-stars. But Common was persistent and finally won her over.”

However, the Academy winner rapper cleared all with The Breakfast Club about his relationship with Regina. He proclaimed,

“That's just my people—that's just my buddy," he said. "We never were in that space—you know, that's just like somebody I care about as a friend. We worked together and right now I'm just single, so."

With no doubt, Common admires Hall as he said she is funny, super cool, and beautiful, but later hinted some probable relationship with Regina.

When the co-host taunted him by saying that Hall mentioned she “had a man” when she was on the show, then Common responded,

“I don't know. She probably does, but that's my buddy. I'm single, so you know."

That was the fact about the relationship between Common and Regina.

However, Regina does favor a family life with kids, as mentioned in an interview. She stated,

"I want a family. I look forward to having kids one day, and having a great partnership.”

"I’d love to raise a son. I think I’d like to offer the world an amazing black man. But then again, I try my best not to think about it too much, because what can I do about it? It is something that’s important to me though, and something that I pray can be a part of my journey here.”

But what is Regina up to now? Is she married and has a husband?

So far, the Scary Movie star remains adamant regarding the matter, but hopefully, she will share about her personal life shortly.

Born on December 12, 1970, Regina Hall has been in the industry for two decades. It is believed she grew up with her sister. But, talking about her family, she is yet to open up about her parents and family members.

When we take a look at her net worth, her work in several movies and television has paid off well, as she boasts a splendid net worth of $6 million, according to Celebrity Net Worth.