By LRU Writer | On: February 12, 2020
Rosamund Pike is an English actress who is best known for her role as Miranda Frost in movie Die Another Day (2002)...is dating her boyfriend...The two have been together since...They have two children named...The actress was born on...and her net worth is around...Rosamund stands at a height of... 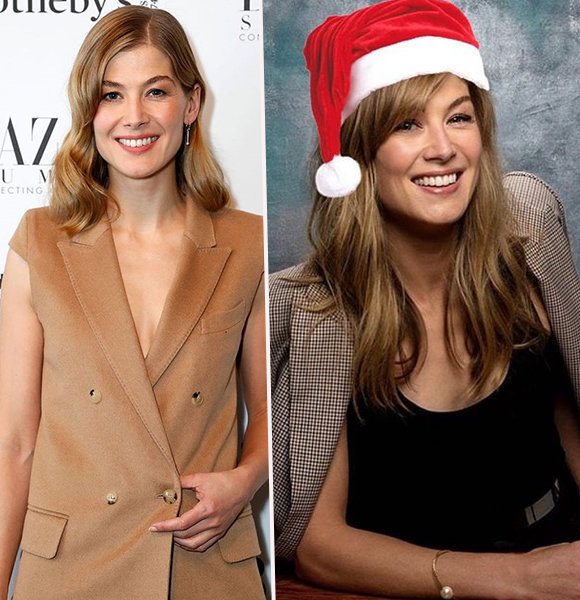 English actress Rosamund Pike made her film debut in 2002 as Miranda Frost in the James Bond movie, Die Another Day. Not only did she become internationally popular because of the film, but she also won the Empire Award for Best Newcomer.

She later appeared in Jane Austen’s classic Pride and Prejudice (2005) in which she played the role of Jane Bennet, alongside actress Keira Knightley. Further, the actress continued to land roles in movies like Jack Reacher (2012), The World’s End (2013), and Hector and the Search for Happiness (2014).

Also, her portrayal of the character of Amy Dunne in the psychological thriller, Gone Girl (2014), was critically acclaimed; she earned a Golden Globe Award nomination for Best Actress in a Motion Picture, Drama.

The actress has been dating her longtime boyfriend, Robie Uniacke, since 2009. The couple has two children together. Rosamund and her partner Robie were blessed with their first child on 6th May 2012, and they named him Solo Uniacke. Further, after two years, the actress gave birth to her second son, Atom Uniacke, on 2nd December 2014. As of 2019, the family lived together in a Georgian townhouse in Islington.

Who Is Robie Uniacke?

Rosamund’s boyfriend, Robie, is a British businessman and mathematical researcher, born in 1961. He attended Eton College in Windsor, England.

He was married to Emma Howard in 1983. He welcomed a son with her named Robie Jonjo Uniacke. However, their marriage didn’t last long, and after his fallout with Emma, Robie tied the knot with his second wife Rose Batstone; but they also separated soon. Robie and Rose have three children together: Hector, Olive, and Florence Uniacke.