By LRU Writer | On: July 29, 2019
Sabrina Carpenter is a versatile actress and singer who has contributed to both pieces of music and acting throughout...impressed all with her acting and singing and also claimed a sweet spot in the hearts of many of... rumored to be dating new boyfriend... cleared peoples doubts claiming they were just good buddies in... 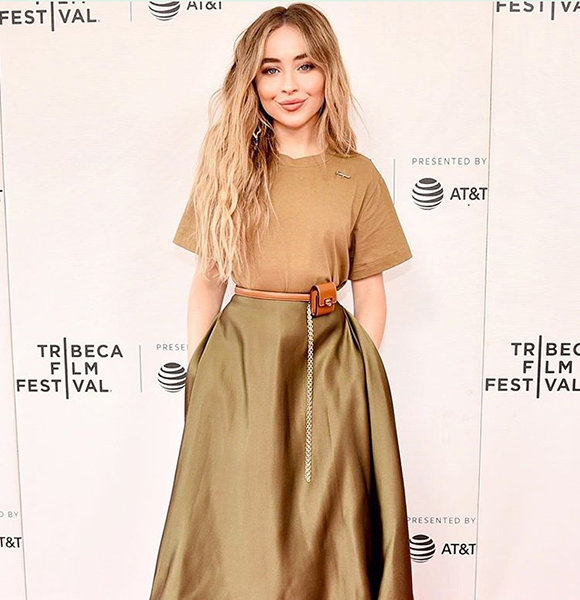 Sabrina Carpenter is a versatile actress and singer, who has contributed to music and acting throughout her career in the entertainment industry.

Famously known as Maya Hart from the hit Disney Channel series Girls Meets World, the actress announced her entry in the music field from debut EP Can’t Blame a Girl for Trying in 2014.

Sabrina Carpenter impressed all with her acting and singing. She claimed a sweet spot in the hearts of many of her male fans with her charm and personality.

Gaining immense popularity worldwide, her dating life was a frequent topic of discussion amongst her huge fan following. The actress did not let the sting fade away as she was rumored to pair with many actors in between 2014-2015.

Sister Dating:- Sarah Carpenter Wiki: A Bio From Her Age to The Cutest Dating Affair with Boyfriend

Firstly, the Girls Meets World actress started dating boyfriend Bradley Steven Perry in 2014. The two met at the Disney show and were long-time buddies. But, after a year together they decided to split in 2015. Sabrina didn’t stop there; she was rumored to be dating new boyfriend, Uriah Shelton following their cozy behavior and closeness off-screen. However, the rumor also didn't last long as it faded away shortly after.

At the end of 2015, Sabrina caught the eye of the media again with rumors of dating Corey Fogelmanis. The two were seen enjoying pool parties, sleepovers, and doing a lot of fun stuff.

However, in 2018, Sabrina cleared all doubts claiming they were just good buddies. As of now the 20-year-old singer is not linked or dating any boyfriend.

Sabrina Carpenter was born as Sabrina Ann Lynn Carpenter on 11 May 1999 to parents David(father) and Elizabeth(mother). She was raised alongside three siblings; Shannon Carpenter, Sarah Carpenter, and half-sister Cayla.

Then she moved to a Chinese television station to showcase her singing talent. The actress sang Something’s Got a Hold on Me which got her praise from all around.

From then, on Sabrina established herself as a profound actor and singer and went on to work in movies and TV shows like The Goodwin Games, Austin & Ally: Moon Week & Mentors. She also sang songs like Smile, Can’t Blame a Girl for Trying which got released on Radio Disney and iTunes.