By LRU Writer | On: January 27, 2020
Australian actress Samara Weaving is best known...is engaged to her long-term boyfriend...got engaged in...reportedly started dating since...at the age of...boasts a gorgeous body that extends to a height...her weight...was born to writer and director father...family moved around between...spent her childhood getting the taste of different cultures...tattoo on her body... 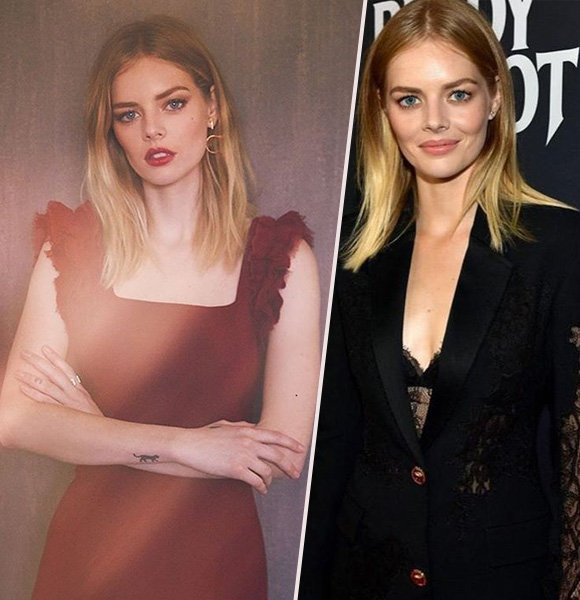 Australian actress Samara Weaving is best known for her crowned performance as Indi Walker in the Australian TV soap opera, Home and Away (2009-2013).

Samara is engaged to her long-term boyfriend, Jimmy Warden.

The couple got engaged in March 2019, and the news of their engagement came after Samara shared the big news on her Instagram with a glimpse of her unique sapphire engagement ring. The Home and Away actress and her new fiancé reportedly started dating in 2016.

Samara's Fiancee Jimmy Warden is an American writer and producer known for his work on movies like The Babysitter (2017), and Shadowhunters (2016).

Further, he works as a creative producer at the Hollywood production company, Wonderland Sound and Vision.

In 2012, Samara was reportedly in a relationship with Singer Axel Whitehead. However, their relationship was shortlived, and the two parted ways after dating for less than a year.

After ending things with the singer, Samara started dating British model Rob Moore in 2013. The couple was spotted at many events and award ceremonies together, but eventually, they separated in 2016 after dating for three years.

Samara was born on 23rd February 1992 in Adelaide, South Australia.

Samara was born to writer and director father Simon Weaving and mother Helena Bezzina. She grew up alongside her younger sister, Morgan Weaving.

Throughout Smara's childhood, the Weaving family moved around between Singapore, Fiji, Indonesia, and back to Australia. During that time, she attended grade school in Jakarta, Indonesia, and eventually went on to study at Pittwater House School in Australia.

Further, Samara spent her childhood getting the taste of different cultures, performing in various short films, dance, and stage shows. In addition to that, she was also involved in the Singapore Dance Company and Canberra Youth Theatre.