By LRU Writer | On: August 23, 2019
Sarah Paulson hasn't been afraid to portray gay character onscreen through...were quick to address her as openly gay, lesbian...Her probable wife was nine years older...Moreover, in 2017, the actress was listed as the 100 most influential people in the world by Time Magazine... 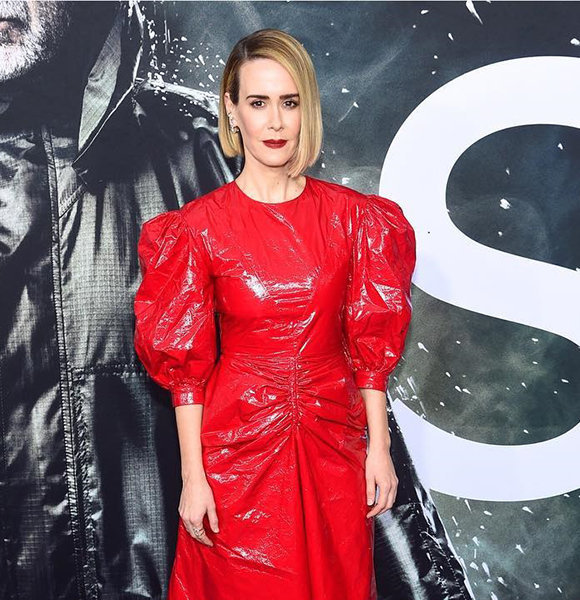 Sarah Paulson (full name: Sarah Catherine Paulson) is known for playing a wide range of characters in FX's horror show American Horror Story. For her performance in the show, she won the Critics Choice Award- in the Best Supporting Actress category- in 2013 and 2015.

Throughout her acting career, she has also appeared in Oscar-nominated movies such as 12 Years A Slave and Carol.

Moreover, in 2017, the actress was listed as the 100 Most Influential People In the World by Time Magazine.

The Serenity actress has mostly dated people with a considerable age gap and even addressed it during her interview with the New York Times.

She was previously engaged to Tracy Letts, an actor, and playwright. Her probable wife was nine years older than her. But, they broke off amicably around 2000. Post the breakup; she started dating Tony Award-winning actress Cherry Jones.

However, in 2009 Emmys, rumors started about their split after Sarah's girlfriend didn't mention the actress in her acceptance speech. The speculations turned true when Cherry confirmed their split in an interview with Us Weekly.

As of 2019, the star is dating American actress Holland Taylor who is 31 years older than her. Allegedly, she first met Holland while in relation with then-girlfriend Cherry in 2006. The pair were also spotted together during the 2018 Emmy Award. Many, criticized about her relationship with someone vastly older than her and even cited mommy issues behind it. However, the actress shared that she has the privilege of being with someone older and wiser than her.

Moreover, the pair seem to have intentions to start a family in the future. On June 2018, Sarah revealed that she had gone through a medical procedure to preserve her fertility by freezing her eggs.

As Sarah Paulson has dated both men and women alike, many news and gossip outlets were quick to address her as openly gay and lesbian. However, after being pressurized to define her sexuality, the actress came forward to discuss her take on sexuality.

As per Sarah, she doesn't want her sexual experiences with the opposite gender to define her at all. For the artist, her taste on both genders can vary from time to time.

She even refused when the LGBT community pressurized her to become an activist due to her high profile. Furthermore, she was quoted saying,

I can meet a man tomorrow and fall in love with him and marry him and I wouldn’t discount any of the experiences that I’ve had with women, or vice versa. I just don’t think anyone is in a position to dictate what that is for me.

However, the performer- height of 5 feet 6 inches(1.6 meters) hasn't been afraid to portray gay character onscreen through films like Carol.

Talking about her net worth, she boasts $10 million as a sucessful actress.