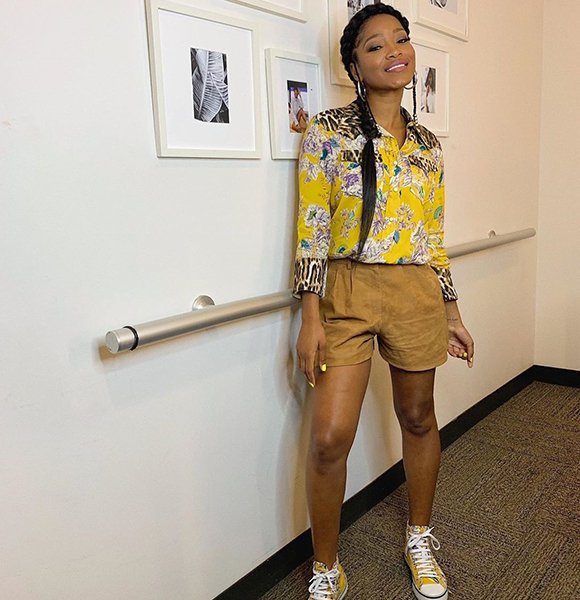 Starting small with a role in Barbershop 2: Back in Business at the age of nine, Keke Palmer is a former child prodigy. As an adult, the actress has made herself known with outstanding performances in The Wool Cap & Akeelah and the Bee.

In the last few years, Keke has acted in hit TV series like Berlin Station, Star, Scream: The TV Series, Keepin' It Real with Keke Palmer.

Besides being an actress, the Illinois native is also a singer. She has released two studio albums, two EPs, and three mixtapes.

From all the fame and stardom, Keke has already accumulated a net worth of $7.5 million. With the amount of wealth she has at her disposal, the actress also engages in philanthropy. She works with charity programs like Cool To Be Smart, Saving Our Daughters, and the YWCA.

Its 2019 and sexuality is a complicated topic. And as such, Keke is one of those people who prefer not to put a label on her sexuality. Due to her liberal views, she has been a subject of many lesbian rumors.

Young Actor In Hollywood :- Logan Moreau Wiki: Everything There is to Know! From Age to His Career Status Now

Back in 2016, Keke depicted bisexuality in her song, I Don’t Belong to You. Later in 2018, she portrayed the character of a lesbian pimp in Lee Daniels’ movie Pimp, which led to many people speculating the actress to be gay.

However, looking back at her dating history, Keke has a lot of past stints with people of the opposite gender. From 2010 to 2013, the actress was romantically tied with Rodney King.

Again in 2013, Keke was rumored to be dating American actor Quincy Brown. Co-stars in the 2015 movie Brotherly Love, the couple is said to have separated back in January 2017.

After two failed romances, Keke might have found the one for her. She started dating actor Elvin Jackson at the beginning of 2018. Moving forward seriously, Keke and her boyfriend moved in together in January 2019. However, the lovers are yet to make a lifetime commitment by getting married.

Although the whole world knows her as Keke, the actress’ real name is Lauren Keyana Palmer. Keke was born in Harvey, Illinois on the 26th of July 1993. But, she was raised in the city of Robbins in Illinois by her parents: Sharon Palmer and Larry Palmer.

All Grown Up Now :- Travis Tedford in 2017; Where is He Now After All The Young Age Acting?

She is not the only one in her family to join the entertainment industry. Both her parents worked as professional actors.

Keke stands with a height of 5 feet 6 inches (1.68 m). To personalize her body, the actress has got herself inked on various parts of her body. Her “Queen Of Kush” tattoo on the back of her neck is probably the most famous one.