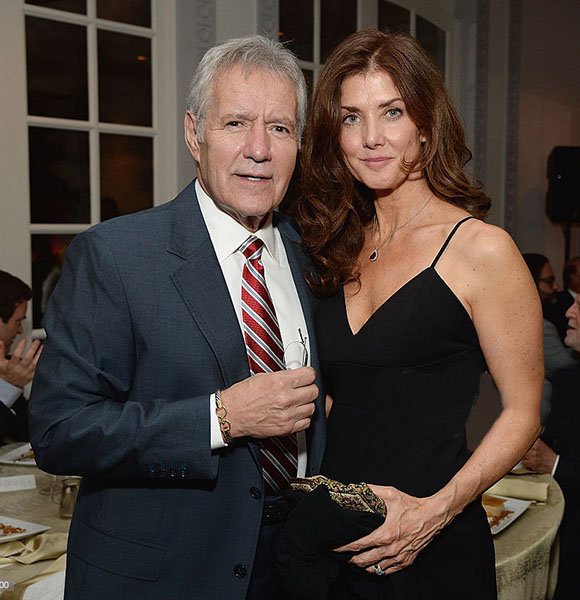 Jean Currivan Trebek is the beautiful wife of the Jeopardy host, but due to her shy nature, she has become the enigmatic figure in the entertainment industry.

However, despite keeping her presence low-profiled, she has been actively looking over her husband's business. Despite the 24 years of an age gap, the couple is still healthy with their 29-years of long married life, which includes their two grown-up children.

So, let's explore Jean Currivan's with the details on her family, along with her age, children, married life and hefty net worth she owns with husband in her wiki.

Born in September 1964, Jean Currivan grew up in Huntington, New York. After getting married to the long-time host of the game show, Jeopardy, Alex Trebek, a last named is added to her name, and she is known as Jean Currivan Trebek.

Jean was just 24 when she first met her husband at the party in 1988. The pair hit it off, and the chemistry between the couple got immediately made. The Huntington, New York native, claimed that she was nervous about dating the Alex who was double her age.

“I was afraid I’d mispronounce my own name! But Alex is really down to earth. He’s much more casual than he is on the show.”

Alex proposed his now wife Jean on her 26th Birthday. At first, he handed her the black velvet pants and a matching jacket as her birthday gift but along with that he proposed her with the 16-carat sapphire ring, surrounded by diamonds. She described that it took her breath away. Jean Currivan with husband Alex Trebek on the stern of the yacht "Jacana" on July 2, 1990, in New York (Photo: accessatlanta.com)

Before proposing the young beauty, the 24 age gap did strike him first, but he decided they togetherly can make it work.

Just at the age of 26, Jean was nervous when she got married to Trek on 30th of April 1990 in Los Angeles' Regency Club with 150 attendees. At the wedding, Trebek had some fun with the proceedings as per PEOPLE. Referring to Jeopardy!‘s answer-question format, he quipped:-

“The answer is… yes”

The beautiful ceremony was not the first marriage of Alex; he was previously married to Elaine Trebek Karens from 1974 to 1981.

Being married to Jean for almost three decades, her husband Alex admitted that he only had one regret in his relationship. He revealed that he wished that he had met with Jean earlier in their 20s. He referenced President Bush who had a happy married life of 73 years.

While the pair rushed to the altar soon after the proposal, the baby news came more sooner than their wedding date.

The couple got the happiest news about their first child to be born three weeks after their married life. The due date was in February 1990, which merely made the couple shocked. And Alex even admitted that the whole affair was terrific. He said:-

"We wanted to have children, but we didn’t think it would happen that quickly—three weeks after we got married!”

Soon after their married life, the couple welcomed their first child, a son named Matthew in 1990. Following this, they welcomed their second child, a daughter named Emily in 1993. Mathew returned to her mother's root by living in New York after graduating from Fordham University.

In turn, Alex purchased a $1.92million townhouse for his in Harlem at 310 West 140th Street as Matthew was looking forward to opening a restaurant.

Matthew did not choose his father's profession and went on to do his own thing. He opened a Mexican street-food restaurant called Oso in Harlem, and his mother invested in it. Daughter Emily graduated from Layola Marymount University in 2015 and wanted to pursue her career in the real estates.

Born in Canada in 1940, Alex became a naturalized U.S. citizen in 1998 and currently resides in Los Angeles, where Jeopardy gets filmed.

Dream House To Husband's Quitting Jeopardy; Net Worth In Millions

Before the happiest day for Jean and her husband, Alex purchased a whole mountain for $1.5 million to build their dream house. After their wedding, they lived in 1984's well-built house at Mulholland Drive.

Since she is the New York-based real estate project manager, there is no doubt with the handsome salary she earns. Though her husband back-stepped in investing in their son's hotel, she had stepped in and had invested in it.

But still, she has not disclosed the exact figure of her high net worth. However, her husband who has hosted the game show, Jeopardy over 30 years reluctantly earns an annual salary of $10 million.

With the hefty salary, the Canadian-born but of American Nationality game show host owns the high net worth of  $50 million.

But it looks like fate has other things planned for him, he won an Emmy for Outstanding Game Show Host in 2019. Will he take this as a sign not to call it quits or as a trophy at the end of the finish line. Only time will tell.

In early 2019, Jean's husband Alex revealed that he had cancer. He had pancreatic cancer which meant there were cancerous cells in the tissues of his pancreas.

However, he fought and won the dreadful battle. He spoke about his pancreatic cancer diagnosis at a benefit in May of 2019. At the event, he talked about a survivor of 22 years and jokingly invited everyone to his 100th birthday if he becomes a 22-year-old survivor.