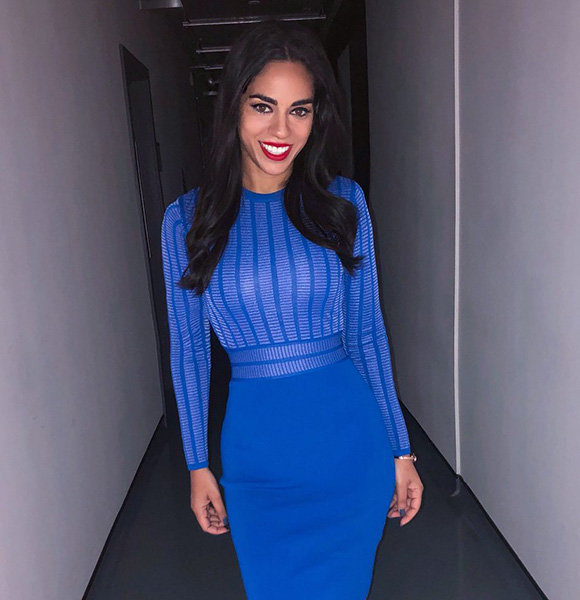 Sharon Carpenter wanted to be a record label head but got into broadcasting television and fell in love with it.

Known for her work in BET and Revolt TV networks, she is a bonafide anchor. Along with hosting gigs, she is a co-creator of VH1’s hit docu-series The Gossip Game and co-founder of Wiretapped-entertainment news site and live video platform.

The TV host, who celebrates her birthday on 2nd March, was born in 1982. A Pisces via her birthdate, her place of birth is England. Thus, she holds British nationality. Well, Sharon is of White-Indian ethnicity. Her father is White while her mother is of Indian descent.

Growing up as a kid with mixed ethnicity, she faced a lot of racism. A shy little Sharon would never discuss her problems with her parents. She would feel ashamed of being a victim of racism. However, listening to the music of people of color like Snoop Dogg gave her power, which empowered her to call out her racist classmates for their behavior as a teenager. After completing her education from Watford school, she moved across the pond to New York. A young Sharon joined Pace University to study a bachelor's degree in business. With the dream of becoming a record label head one day, she joined a music company as an intern.

But things didn’t work out as planned; it turned out that her dream job wasn’t as exciting as she had thought. One day a friend suggested a gig interviewing music artists. Thus, she joined WWOR-TV channel and never looked back in her career.

Sharon likes to keep her personal life hidden. The TV host refuses to reveal her boyfriend or potential husband's name.

However, she did mention about being in a relationship while complaining about Uber’s services and comparing her beau’s Uber prices with her own in a Twitter thread on 1st July 2018.

Sharon’s Height, Weight, And Net Worth

Along with being a charismatic host, Sharon is blessed with an attractive body. She possesses a height of 5 feet 6 inches (1.67 m) and boasts a weight of 130 pounds (59 kg).

The beauty built her career based on her talent and determination. Besides working at BET and Revolt TV, she was also a part of CBS, VH1, BBC America, Wendy Williams Show,106 & Park, and CBS MarketWatch.

Due to her long experience in the hosting gig, she makes an average salary of $47,787 per year, which adds to her net worth.

Interestingly, Sharon also tried her hands in acting. She appeared in the first season of Fox’s Empire as herself. In the show, she interviewed Jamal (played by Jussie Smollett) in a fictional show called Spilling The Tea With Sharon Carpenter.