By LRU Writer | On: May 27, 2018
Siera Haschak is one-fourth part of the youtube channel Haschak Sisters, which comprises four sisters dancing and providing cover to numerous hits including Kanye West's Clique and Mark Ronson's Uptown Funk. The close-knit sisters share a special connection with each other and are regularly seen flaunting their strong bond in their videos and pictures. Siera is the most talented dancer of the sisters. The 14-year-old's talent is however not just limited to dancing as she is also a brilliant singer. 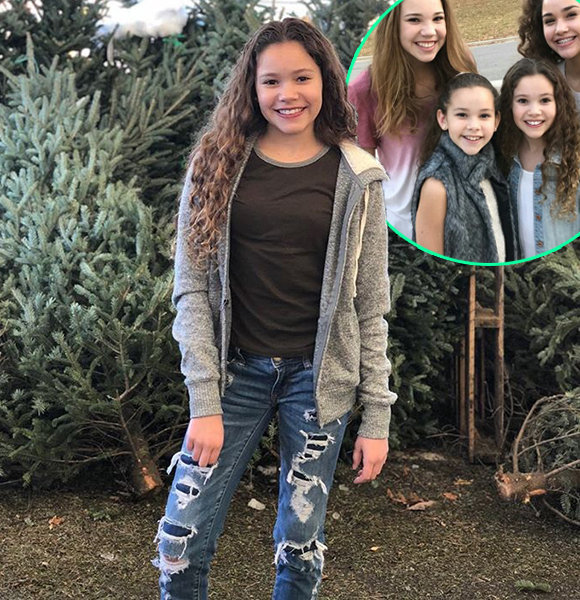 The 14-year-old's talent is however not just limited to dancing as she is also a brilliant singer.

The close-knit sisters share a special connection with each other and are regularly seen flaunting their strong bond in their videos and pictures.

With the advent of YouTube, the number of independent content creators has been on the rise. And Haschak Sisters are one if the most popular channel on YouTube. With 4.7 million subscribers on their channel, the sisters have earned a massive fan following.

Sierra Haschak is the third child of the Haschak family, and along with her sisters Madison, Grace, and Olivia they perform cover dance videos which she shares in the youtube channel, Haschak Sisters. The sisters are all similarly aged raging from 13 to 17 and share a special bond with each other. Siera regularly features in Q&A videos with her sisters, where they not only answer fans questions but also remind the world about their chemistry.

Whats more, the Temecula native's Instagram wall is adorned with pictures of her sisters. Siera never fails to treat her followers with updates about the close-knit family, whether they be backstage ready to perform of casually strolling around in the house.

Her insta wall is also regularly updated with sweet throwback pictures of her sister's as a child ready to start school with nicely combed ponies, or remembrance about each others birthday.

Dancer, Singer, Artist, and Many More

Siera started dancing from just the age of 2. Her father, John Haschak was also a performer who competed in America's Got Talent. And he realizing Siera's love for dance encouraged her to keep on following her instinct and even enrolled her in a dance academy. The Temecula Dance Company alum is a trained dancer and has mastered many forms, including jazz, tap, hip-hop, and ballet. The star particularly favors jazz and hip-hop dances.

However, it's not just dance, where Siera excels in. The multi-talented star is also involved in singing sessions with her sisters and has released numerous originals through their YouTube channel. Their songs are a brilliant depiction of everyday situations and are regularly viewed by millions of viewers around the globe.

Not just dancing and singing, Siera is also interested in academics and lists Maths as her favorite subject. In a Q&A video on YouTube, the young age star revealed that she loved getting ahead on homework, and studying in her free time, and revealed that she had never given dating a thought.

She also loves to paint in her past time and loves hanging out with her famous siblings.

Already a big star in her own right, Siera is on her way to achieving the unprecedented heights which mere mortals can only dream of.