By LRU Writer | On: March 11, 2019
Sophia Body first gained traction via Instagram because of her voluptuous - wait for it - body. Since coming to prominence, she has amassed over 710 thousand followers the social media platform... Beyond her online presence, she's a cover girl on the pages of SHOW and Black Men Digital... 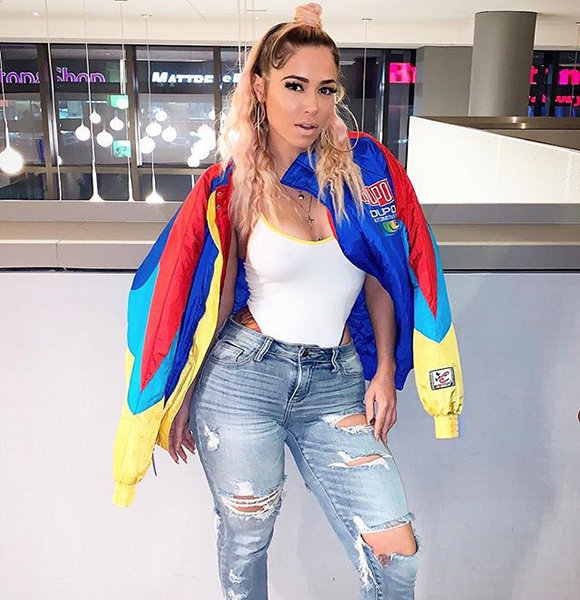 Sophia Body first gained traction via Instagram because of her voluptuous - wait for it - body. Since coming to prominence, she has amassed over 710 thousand followers the social media platform.

Beyond her online presence, she's a cover girl on the pages of SHOW and Black Men Digital.

The Instagram star, over the years, is transforming into a legitimate reality show staple with appearances on Love & Hip Hop: New York(2017) and Black Ink Crew.

Originally from Toronto, Sophia, age 27, holds the Canadian nationality. The Instagram sensation, born in 1992, celebrates her birthday on 31st January every year.

An Aquarius by the birth sign, she identifies belonging to mixed ethnicity as her parents were a mixed-race couple. Per her wiki - Hispanic, French and Greek lineages contribute to her mixed heritage. Sophia Body and her father are all smiles in a photo dated before 2009 (Photo:-starcasm.com)

Though Psychology was her dream growing up, Sophie changed her career aspirations once her modeling career took off.

Measurements: Before And After Plastic Surgery

Standing a little over five feet and seven inches (170 cm) in height, the 27-year-old video vixen boasts an hour-glass like body measurements.

Like many of her peers, she underwent numerous plastic surgeries to enhance her beauty. That said, unlike them, Sophie is very open about going under the knife. She once told VladTV:-

"I've had everything done, I've been everywhere to do it. Everybody has [butt] shots."

From getting her boobs done thrice to undergoing a minor operation on her ear lobe, the Toronto native's no lesser than a successful science project. A closer inspection of before and after surgery image of Sophie says it all.

Her infatuation with plastic surgery began when she first moved to Miami. However, the majority of her cosmetic work got carried out in Colombia.

Boyfriends In Industry; Dating Anyone?

Because of her curves, Sophie became a go-to vixen for rappers looking to shoot a video for their singles. East Coast rapper French Montana was one of them.

Romantically Linked With French:- Rosa Acosta With Former Boyfriend Again? Her Dating Affair Goes Back and Forth

She and the Unforgettable hitmaker's professional relationship took a romantic turn shortly after their meeting in May 2012. And, after about three years of dating, the Instagram star and her then-boyfriend French called it quits.

A heartbroken Sophie then found comfort in Love & Hip-Hop veteran, Jaquae. The former couple's romance was a much-publicized affair and even got chronicled in the franchise's New York offering in 2017.

Although she and her then-boyfriend made for a fitting fair, the relationship came to a tragic end. Jaquae kicked her out of his house after learning about her "friendship" with James R.

Besides French and Jaquae, Sophie claims to have dated rapper-turned-reality star, Safaree Samuels.