By LRU Writer | On: November 21, 2019
British actress Sophie Skelton rose to fame...has appeared in movies like... was named as one of...has maintained total secrecy, when it comes to her love life...her on-screen chemistry with her Outlander co-star...was born as the youngest child... parents run their own toy company...also shares a very close bond with her on-screen family... 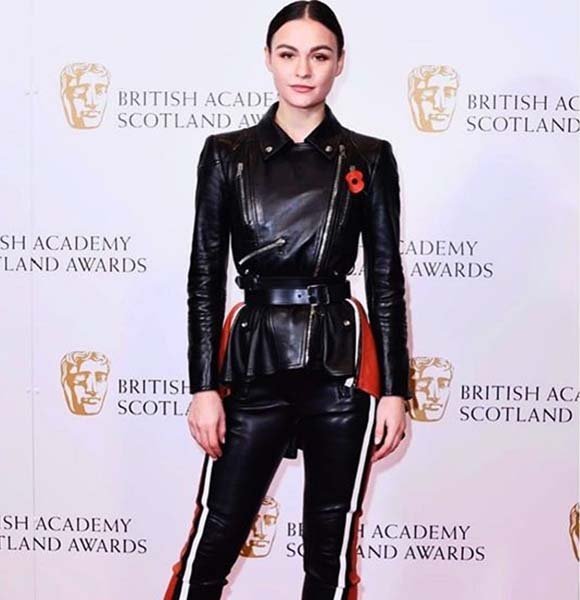 British actress Sophie Skelton rose to fame from her portrayal of Brianna Mackenzie in the hit time travel series Outlander in 2016.

Apart from her breakthrough role in the BAFTA-winning and Emmy nominated series, Sophie has appeared in movies like Day of the Dead, The War I Knew, and Another Mother's Son, to name a few.

Further, in 2018, Sophie was named as one of the Top Ten Brits to Watch by the prestigious Variety magazine.

Considering Sophie's massive fame, the curiosities among her admirers regarding her dating affair and a possible boyfriend, do not come as a surprise.

However, The Dumping Ground actress is someone who has maintained total secrecy, when it comes to her love life.

Well, with the absence of any scoop about her actual love life, for now, her fans should be content with her romantic escapades on screen. In fact, her on-screen chemistry with her Outlander co-star Richard Rankin was so convincing that it even sparked dating rumors.

However, both Sophie and Richard have never addressed such rumors. Sophie Skelton with co-actor Richard Rankin in a still from Outlander (Photo: vanityfair.com)

Apart from Richard, Sophie has never even been spotted or linked to anyone else, so far. Well, with her squeaky clean love life, all one can do is make speculations until an actual confirmation comes from Sophie, herself.

Sophie was born as the youngest child to, Ruth and Simon Skelton.

Her parents were children's toys and games creator, who met and fell in love with each other. Since her childhood, Sophie, along with her older brothers- Sam Skelton and Roger Skelton, were privileged with toys because of their parents.

As of now, her parents run their own toy company and create toys for Disney.

Further, her parents were also huge movie fans. They often watched classic movies together as a family, which was the contributing factor to Sophie's passion for performing arts.

You May Be Interested:- Imogen Poots Boyfriend, Dating, Husband, Family

Needless to say, Sophie shares a very close bond with her parents and brothers. Moreover, she never shies away from showing her love for the family in her social media.

Apart from her actual family, the Outlander star also shares a very close bond with her on-screen family: the cast of Outlanders. On the occasion of Sophie's birthday in 2019, her on-screen father, Sam Heughan, posted a very sweet and funny message on his Instagram.

Sophie was born as Sophie Alexandra Skelton on 7th March 1994.

Speaking of her physical attributes, the beautiful actress boasts a gorgeous figure, standing at the height of 5 feet 7 inches (1.70 m) with a complimenting weight of 53 kgs (117 lbs).

Well, to maintain her gorgeous figure, Sophie, who is a trained ballet dancer, practices her ballet as a part of her workout routine. Further, the actress is also known to undergo thorough severe training for her acting projects. She famously learned combat training for the 2018 movie, Day of the Dead: Bloodline.