By LRU Writer | On: October 21, 2019
Spencer is dating another basketball player...planning about marriage...comes from an educated family...went to the University of...has height of...has weight of... 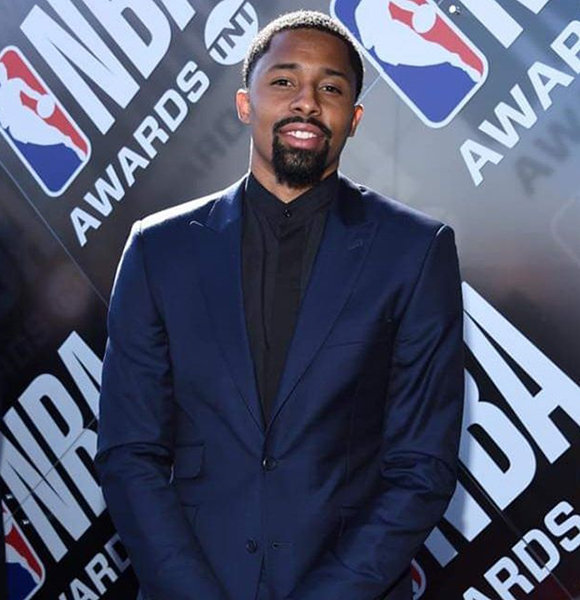 If you are an avid basketball lover and follow the NBA carefully, you probably know Spencer Dinwiddie. Spencer has been a consistent performer in the NBA over the years.

But, where did he come from before rising in stature in the NBA? Where did he start his journey to reach where he is now? Who was his backbone? Read on the article to find out.

Before we talk about Spencer’s rise to stardom, let’s talk about his dating life. Spencer is dating another basketball player Arielle Roberson as of October 2019. The couple started seeing each other when they were both freshmen at the University of Colorado Boulder. It all began when the two first met at a women’s basketball game.

You May Also Like:- Lonzo Ball Girlfriend, Baby, Dad, Brothers

Their relationship has only progressed and grown since their first meeting, and now, Arielle is his baby's mother, too. The baby boy, whom the couple named Elijah, was born on 20th April 2018.

After about a year from his son's birth, Spencer made Arielle his fiancee' and put a ring on her on 23 January 2019. The engagement day also happened to be her 26th birthday. With a son and a happy family, Spencer must already be planning about making Arielle his wife, but he has hinted nothing of the wedding yet.

Spencer Dinwiddie was born to Stephanie Dinwiddie and Malcolm Dinwiddie, and also has a brother named Taylor Dinwiddie.

The Brooklyn Nets’ player comes from an educated family as his mother holds a Ph.D. from USC. She also owned a pre-school. His father, on the other hand, worked as a real estate agent.

After finishing his high school education while also playing ball and collecting accolades, he went to the University of Colorado. Dinwiddie chose to play for Colorado despite getting offers from Harvard and Oregon.

While playing for Colorado, he declared for the NBA Draft at the end of his junior year. He was drafted 38th overall by the Detroit Pistons at the 2014 draft.

And Spencer hasn’t looked back since the draft, appearing for various teams such as Chicago Bulls and Brooklyn Nets. He currently plays for Brooklyn Nets, with whom he signed a three-year, $34 million deal in December 2018.

Spencer is just 26 years old, and he still has a lot of years left in the NBA to showcase his best game.