By LRU Writer | On: October 09, 2019
Tatyana Ali...garnered much attention to her name. With...an affectionate husband who dated Tatyana for...Her parents are from ...amassed a fortune of... 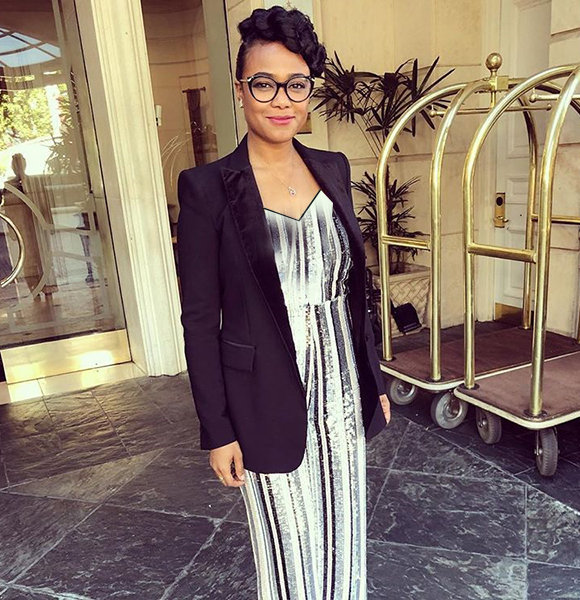 Known for the role of adorable and cute Ashley Banks on the hit show, The Fresh Prince of Bel-Air, Tatyana Ali is a name only a few wouldn't recognize. Acting and singing alongside famous Hollywood actor Will Smith, Tatyana rose to fame at an early age.

She worked in projects like The Cosby Show, The Mickey Mouse Club, Kyno's Storytime, Are You Afraid of the Dark?, and Foster's Field Trip.

The actress continued to garner much attention to her name, with hit movies like Jawbreaker, Deadly match, Rockin Meera, Glory Road, and Kiss The Girls. She has a total of 78 acting credits to date.

Interestingly, Tatyana also boasts hit songs to her name including He Loves Me, Daydreamin, Boy You Knock.

The former child actress is married to husband Dr.Vaughn Rasberry since 2016.

He is an associate professor of Stanford, indulged in the studies of African American Diaspora Literature, twentieth-century American Fiction and Philosophical Theories of Modernity. The pair dated each other for two years, before getting married.

Their wedding took place on 19 July 2016, with a Caribbean themed ceremony in Beverly Hills. Tatyana was pregnant when she got married to her longtime boyfriend.

Thus, just two months after her wedding, the actress gave birth to a healthy baby boy on 16 September 2016. According to Tatyana, she would like her son, Edward Aszard Raspberry, to have the best of everything. On the topic of her child, on 13 April 2019, Tatyana announced the news of her second pregnancy. Flaunting the baby bump on her Instagram handle, she and her husband are ready for baby no 2.

But, excited and anxious parents did not reveal the gender of the upcoming child at first. Maybe, they wanted to keep it a secret like the first child's time.

However, with the second child's birth, every missing detail about the kid was quickly unveiled.

After celebrating their third anniversary in 2019, Tatyana and Vaughn were blessed with the birth of their second child as well. Only a few months after the anniversary, on 15 August 2019 the lovely duo welcomed their second son into the world.

Full named Alejandro Vaughn Rasberry, the details of their baby were well under wraps. Only after their kid turned a month old did the details first surface in media and news outlet. There is no idea why the family kept the news private only to unveil the baby's birth date and gender later. However, Tatyana did share the experience of her pregnancy through the gossip site Essence.

While details of her second pregnancy are unknown, she gave insight on her very first delivery.

According to Tatyana, the birth of son Edward was challenging in many aspects. Wanting a natural birth at first, but, ended up with the use of epidural and an emergency C section.

Since facing difficulties in the birth of the first child, she even wrote down about the experience. Though Tatyana is yet to speak about her second child's birth, updates regarding the detail are soon to surface.

Tatyana is at the age of 40, according to her date of birth, 24 January 1979. Born in North Bellmore, New York, the actress' parents are Sheriff Ali, a retired police officer, and Sonia Ali, a nurse.

Her parents are of diverse ethnicity. While her dad is of East Indian ancestry, hailing from Trinidad, Tatyana's mom is of Afro-Panamian heritage. Although from a mixed lineage, she possesses America nationality.

The actress-singer is estimated to have amassed a fortune of $6 million from her career. Still boosting Tatyana's net worth is her upcoming 2020 movie, The Reason.

Besides her acting work, she has also been included in various projects.

As of 16 July 2019, she launched the podcast named March of Dimes. Working for the non-profit organization, Tatyana has lent her voice to fight for the health issues of mom and babies everywhere.