By LRU Writer | On: January 23, 2020
Thomas Middleditch is a Canadian actor...played Richard Hendricks in HBO’s hit TV show, Silicon Valley...McNuggets rap he did with a friend went viral...used as McDonald’s commercial...wrote and produced Memoirs of a Manchild...married to Mollie Gates, a designer...revealed his swinger lifestyle...born on 10 March...has a net worth of... 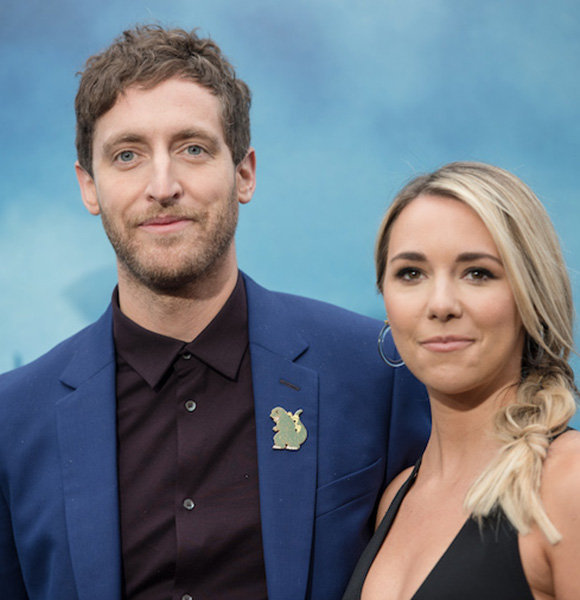 He is also an accomplished writer credited for shows like Memoirs of a Manchild (2009) and CollegeHumor Originals (2013).

The Silicon Valley star is married to Mollie Gates, a designer. The two tied the knot on 22 August 2015 in his hometown of Nelson, British Columbia, Canada. The actor spoke with Playboy in 2019 and revealed his swinger lifestyle. He further added that swinging had saved his marriage. In his own words:

“Only after I got married was I like, ‘Mollie, I’m sorry, but we have to get nontraditional here.’ To her credit, instead of saying ‘F–k you, I’m out,’ she was like, ‘Let’s figure this out. To be honest, swinging has saved our marriage. We have different speeds, and we argue over it constantly, but it’s better than feeling unheard and alone and that you have to scurry in the shadows.”

Thomas Steven Middleditch was born on 10 March 1982 in Nelson, British Columbia, Canada. Both his parents are English immigrants.

Thomas played in The Line (2008) for his debut work. The next year, he made appearances in The Rebound (2009) and Splinterheads (2009). The same year, Memoirs of a Manchild, which he wrote and produced was released.

According to celebritynetworth.com, Thomas has a net worth of $7 million.

Thomas went viral online in 2006 before he started acting professionally. The McNuggets rap he did with a friend blew up overnight and McDonald’s purchased the video. It was used as McDonald’s commercial for some time and made the Silicon Valley actor quite popular.