By LRU Writer | On: November 17, 2019
Tim Robards slammed all the negative rumors of his relationship with wife Anna Heinrich as the lovely couple attended the...siblings to accompany him, the Australian native was an active and...concentrated fully into studies and achieved a doctorate degree in... 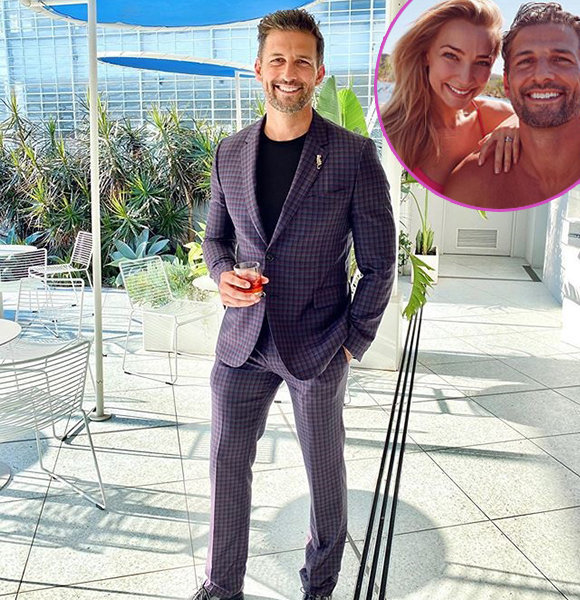 Tim Robards slammed all the negative rumors of his relationship with wife Anna Heinrich as the lovely couple attended the Melbourne Cup at Flemington in November 2019.

After being surrounded by a much talked about breakup rumors at the start of October 2019, Tim had a lot to justify regarding his marital status.

However, when asked repeatedly about their divorce, both have denied anything regarding their split. Let’s know more about what is going on in their lives.

Finding love is not an easy job. Some get lucky with it, and some don’t find it despite trying hard. In the case of Tim Robards, things panned out very well for the multi-talented personality.

In search of love, he joined the cast of the first-ever Australian Bachelor’s in 2013 and found the perfect girlfriend immediately. The girl was non-other than Anna Heinrich.

The couple built great chemistry in the show and continued dating outside of it, as well. After dating for nearly four years, the lovers got engaged on 24 May 2017. The wedding bells soon followed in June 2018, and the couple married in front of a bunch of close family and friends in Southern Italy. Now, with one year of their marriage complete, Tim and Anna are slowly eyeing to build a family with children very soon.

Tim Robards was born and raised in Newcastle, Australia, on 1 October 1982 to Tanya and Colin Robards. Along with his parents, he has a brother named James and sister Angela in a family of five.

With siblings to accompany him, the Australian native was an active and playful child. He played a lot of games while growing up and built an interest in exercise science and physics.

Apart from that, he was also a successful teen model back in the days. Later, Tim concentrated entirely on studies and achieved a doctorate in Chiropractic.

Now, the six-footer is one of the leading names in the field of health, fitness, and healthy living in Australia.

Fitness is one of the most essentials traits that help to maintain a healthy and long-lasting lifestyle. Abiding by the same rule, 37-year-old Tim has been able to live a healthy and luxurious lifestyle.

The former Bachelor’s contestant not only applies the rule himself but also accumulates a decent net worth teaching it to others.

He is a doctor by profession and leads his fitness programs and exercise routine from the front. Though he opted to appear in some reality shows like The Bachelor Australia and I’m a Celebrity...Get Me Out of Here, Tim associated with the show only for a brief period.

Now, he is entirely concentrated on the work he does best and is eager to help people get healthy.

Australian Actor The Bachelor Neighbours Anna Heinrich I’m a Celebrity...Get Me Out of Here