By LRU Writer | On: September 16, 2019
Excellence is actress Toni Collette’s middle name. The Australian acting powerhouse is an Emmy and Golden...Toni and her husband, Dave Galafassi had the sweetest meet-cute. She attended...Given her acting talent and dedication for the profession, Toni’s net worth of... 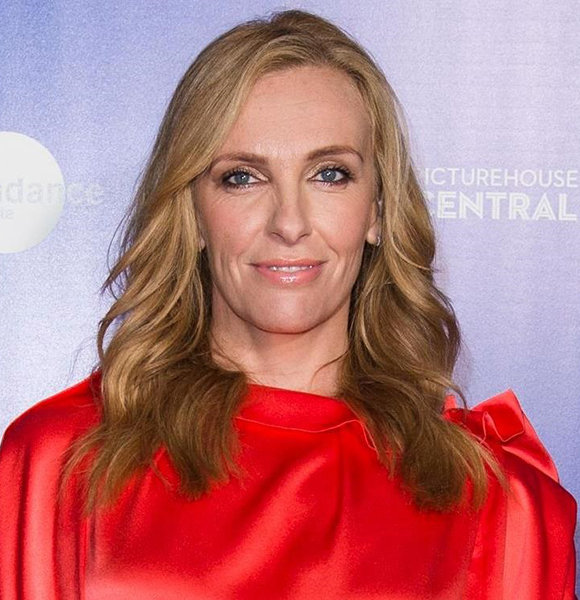 Excellence is actress Toni Collette’s middle name. The Australian acting powerhouse is an Emmy and Golden Globe Award-winner (both in 2010) for her leading role as Tara Gregson in the TV series, The United States of Tara.

Back in 2000, she was also nominated for an Oscars in the Best Actress in a Supporting Role category for the movie, The Sixth Sense.

In 2019, she entertained the audience via Netflix’s crime thriller, Unbelievable- which premiered on 13 September.

Toni and her husband, Dave Galafassi, had the sweetest first encounter. She attended Dave’s - a musician by profession- gig in Sydney. After the initial meeting, the pair met again at a house party.

According to the Emmy winner, when her future husband kissed her on the cheek, she just melted. Interestingly, she had plans to ditch the party in ten minutes but ended up staying for twelve hours.

Fast forward to 11 January 2003; the couple got married in a Buddhist ceremony at Syndey. The intimate wedding boasted a vegetarian banquet. Post the wedding; the couple decided to collaborate professionally in 2006 and formed a band called Toni Collette and the Finish, where the actress lent her vocals while her husband played the guitar. They even released the band's album titled Beautiful Awkward Pictures, the same year. However, post the debut album, the couple didn’t release any more musical work together.

Well, their lack of new music was justified as the pair were busy planning on expanding their family. On 9 January 2008, Toni and her husband’s first child, a daughter named Sage Florence Galafassi, was born.

The couple further added another member to the family as they welcomed a son named Arlo Robert Galafassi on 22 April 2011.

To date, Toni and her husband remain married and an exemplary couple in Hollywood.

Toni boasts a reputed filmography in the acting industry. She has over 80 acting credits including memorable roles in movies; Little Miss Sunshine and Muriel's Wedding. In the former, she put on 18 kgs in just seven weeks due to her role’s demand.

The actress was sure rewarded for her dedication as she fetched a Golden Globes nomination for the part in 1994. Along with award show buzz, she swiftly went through significant weight loss with pilates.

Given her acting talent and dedication for the profession, Toni’s net worth of $18 million is well deserved.

The actress of height 5 feet 8 inches (1.73 m) can surely do no wrong as she is an LBGT ally at heart. In 2018, she sat down with comedian John Early for a vulnerable chat on A24's podcast, where he discussed his love for Toni when he was a 13-year-old closeted gay guy.