By LRU Writer | On: January 08, 2019
Racing legend, Tony Stewart has seen the best and the worst days of life...From an abusive childhood to a broken engagement, several failed relationships, and even a murder charge, the former professional racer has endured all the pains...After years of hard work and dedication towards his career, he can now enjoy his status as a legendary stock car racer...Moreover, he excelled in his personal life and even got engaged to his loving fiance... 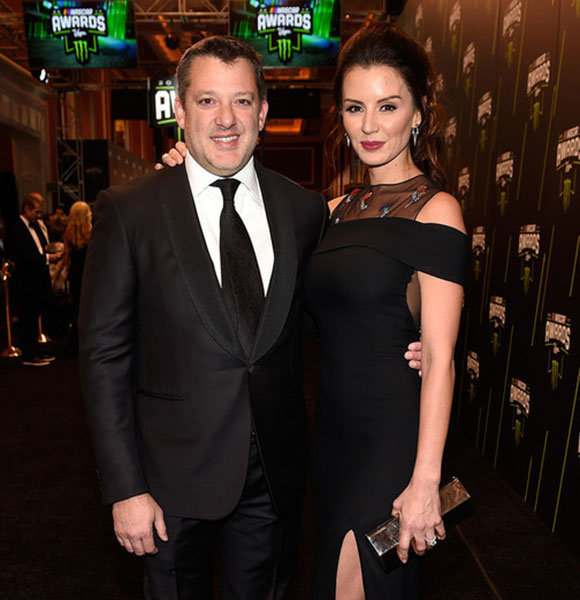 Racing legend, Tony Stewart has seen the best and the worst days of life.

From an abusive childhood to a broken engagement, from several failed relationships to a murder charge, the former professional racer endured all that time and circumstances threw at him.

Moreover, he had thousands of haters booing him during his racing events. But, facing the odds, Tony never gave up hope and remained intact in his struggles. After years of hard work and devotion towards his career, he finally got to embrace his status as a legendary stock car racer.

He also excelled in his personal life and got engaged to his loving girlfriend. It seems like Tony has finally made it through the night and is heading for a brighter day.

Tony, born as the son of Nelson and Pam Stewart, was often abused both physically and emotionally by his father during his childhood. Tony's dad often threw around his tantrum or beat up the young boy if things didn't go as intended.

He even made Tony participate in different racing events and often lost his temper if Tony failed to win the race. Further, the racing star was also an outcast during his schooling years and was frequently bullied for not meeting to the society's standards.

When his family separated after his parents' divorce, 17-year-old Tony grew a rebellious attitude and rode his bike over-the-speed-limits on several occasions; for which he even had to serve probation sometimes. Nevertheless, he used his riding skills and carved out a future in the racing world while making a good bond with his dad.

But aside career, Tony, who stands at the height of 5 feet and 9 inches (1.75 m), faced numerous failures in his relationships. He dated several girlfriends including Tara Roquemore, Jaime Schaffer, and Krista Dwyer.

He was even engaged to Tara for a while back in 1999, but the couple ended their relationship. His multiple failed affairs led speculations that the Indiana native was a gay man and that's why he was unable to maintain a longterm romance. However, the rumor was merely just gossip as he falsified it with his new relationship.

Engaged To Girlfriend; Plans For Getting Married!

Tony has been together with his girlfriend-turned-fiancee, Penelope Jimenez, for two years now. Penelope, age 40, is a model-actress known for appearing in the front cover of Playboy magazine in March 2003. The couple first met in 2016 and shortly commenced their dating relationship.

Tony had earlier mentioned that he would never get married in his life. But, Penelope may be the perfect one for him as he proposed her to marry him. Looking forward to making her his wife, he popped the question to his girlfriend in late-November 2017.

And, she immediately accepted the proposal after which the pair got engaged. Tony Stewart attends an event with his fiancee Penelope Jimenez in 2017 (Photo:Nascar.com)

Tony and his fiancee have not revealed their plans for the wedding yet. But, looking at how Tony kept his engagement a private affair and notified fans only after few days, it seems like the ceremony - where he will pronounce Penelope as his wife - might be a low-key event.

The disturbing memories and broken romances aren't the only painful weight the racing car driver carried. Tony, who ages 47 as of January 2019, killed a fellow racer accidentally in 2014.

On 9 August 2014, while participating in a sprint car race in Canandaigua, New York, he unintentionally hit the 20-year-old competitor, Kevin Ward Jr. He was later pronounced dead on the hospital. So, Tony was initially charged with two offenses: second-degree murder and criminally negligent homicide, but, the case was dismissed after Tony made an out-of-court settlement with the victim's family.

Following the case, Tony announced his retirement from racing world in 2015. He then revealed that 2016's season would be his last one to race. As of now, Tony has put the weight of his ugly past behind and is ready to start a new life.

But, it doesn't mean he has halted racing fully. In free times, he controls his beast and flaunts his skills. For instance, he raced with his dad in the King of the UMRA TQ Midget Race held at the Bartholomew County Fairgrounds in July 2018.

Aside, just hobbies, he handles his job as an owner of the American professional stock car racing team, Stewart-Haas Racing.