By LRU Writer | On: August 06, 2019
Tua Tagovailoa is a true freshman who is recognized by every NFL fan around the globe for...Winning the game in the buzzer, Tua was the mediator of the defining pass that...was supported by his family... he attended Saint Louis School in Honolulu, Hawaii. He slowly moved towards playing football and gained...joined the University of Alabama and started playing for the... 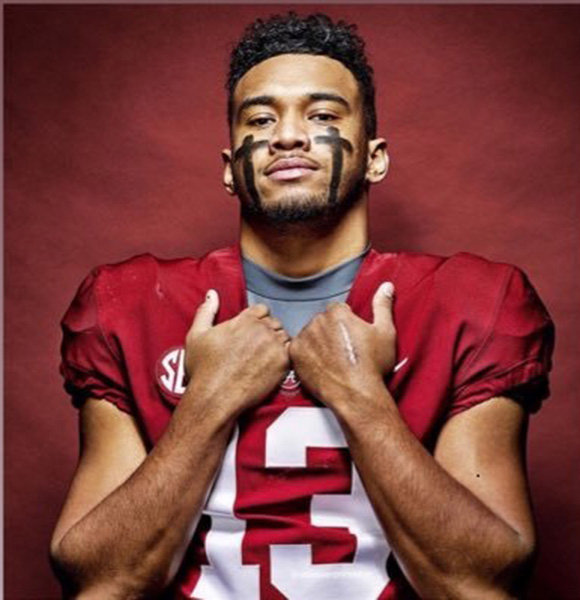 Stealing the spotlight with a game-winning touchdown pass in overtime for the Alabama Crimson Tide, Tua Tagovailoa became an instant favorite of all football fans.

He had climbed up the ranks with an impressive run in high-school before joining the University of Alabama in the second half of the 2018 College Football Playoff National Championship.

Cashing in on his efforts, Tua became the first Samoan quarterback to win the prestigious league.

As of 2019, the star athlete is on his way to make a dramatic entry in the NFL.

Tua Tagovailoa is a new face in football, but his heroic acts in the National Championships has surely turned heads around.

His success has diverted the focus of fans towards his dating life. Although Dinah Jane of the girl band Fifth Harmony had once said that she loved seeing the athlete in action, there were no romantic ties between the two.

Further, Tua has other plans for his to-be-girlfriend.  In 2019, he mentioned that he wanted a girlfriend to cheat on the rigorous diet plans of his father. Tua revealed that his romantic interest should commute local fast food to him at home.

However, it seems the star footballer is yet to find such a girl as he is reportedly still single in 2019.

Tua Tagovailoa was born on 2 March 1998 in the Island of Hawaii. His parents: mother Diane and father Galu raised him alongside his younger siblings;  a brother named Taulia and two sisters called Taysia & Taylor.

Ever since a young age, Tua was supported by his family. His parents even left their home and moved to Atlanta to be with the quarterback. Possessing a Samoan ethnicity, Tua and his family are devout Christians. Tua's uncle, Tuli Amosa, pastors a church in Hawaii and his father also follows strict work ethics. Growing up, he attended Saint Louis School in Honolulu, Hawaii. He slowly moved towards playing football and gained massive success in the sport.

Tua's height of 6 feet 1 inch (1.85m) and weight of 98 kgs has helped him dominate his opponent in strength and agility.

The offensive quarterback was the top-ranked high school football player in the class of 2017 and was named the Offensive MVP of the National Championship with 166 passing yards and three touchdown passes.

After finishing his high school career on a good note, Tua joined the University of Alabama and started playing for the Crimson Tide in the second half of the 2018 College Football Playoff National Championship.

As of now, the Tide star is preparing for the next season of college football with hopes of playing in the NFL soon and start a splendid career.