Valtteri Bottas Girlfriend Turned Wife, A Real Achiever Just Like Him; Meet Her

By LRU Writer | On: January 02, 2019
Valtteri Bottas, a racing driver, is currently competing in Formula One with Mercedes...he is a married man...married to his girlfriend of years...wife is also a real achiever with a career in...The couple began dating back in...The duo tied the wedding knot at...the pair celebrated their second anniversary on... 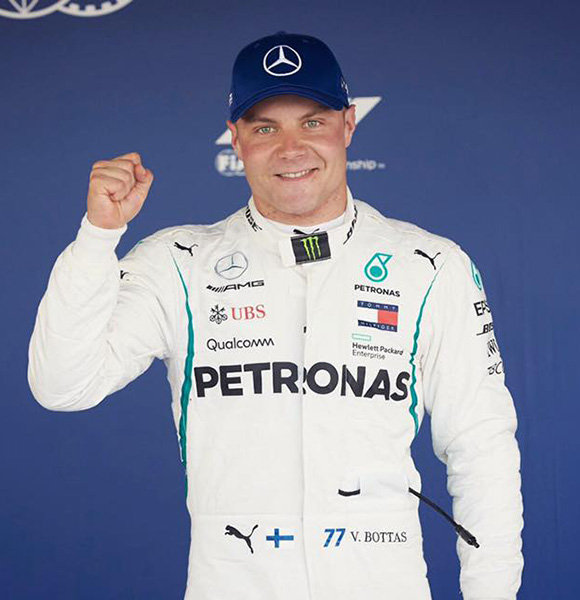 Finnish racing driver Valtteri Bottas is currently competing in Formula One with Mercedes. He previously drove for Williams for three years till 2016. The very same year he exchanged the wedding vows with his wife.

While his wife is totally supportive and not afraid of his career as a racing driver, she is surely aware of the risks that come with his job. Nevertheless, she stays by his side as his lucky charm and shield.

Join in as we reveal insights on Valtteri's wife, and ethnicity along with the relationship they share!

Who is Valtteri Bottas's Wife?

Valtteri Bottas, who began his racing career at an early age, is happily married. His wife is none other than the beautiful Emilia Bottas. She is not only one of the most beautiful WAGs of Formula 1 but is also a talented star. She is a swimmer, who represented Finland in the Olympics.

See Also: Who Is Dario Franchitti Married To? Meet New Wife After Divorce With Former Flame

She had her hands in swimming at a very early age. She competed at the Olympics for the first time at the age of 15. Since then, Emilia paved her path to mold her career as a swimmer. Apart from swimming, Emilia has enthusiasm for horse-riding. She has been part of numerous showjumping competitions.

While Valtteri and Emilia both reached the height of success in their career, their relationship also flourished. And, both of them have been putting equal efforts to continue the blissful romance.

Valtteri and Emilia, both of white ethnicity, began dating back in 2010. It is not known how they feel in love but the roots of their relationship must go really ago as they are still together and happily married. Valtteri Bottas with his wife Emilia Bottas on their wedding on 10 September 2016 (Photo: thisisf1.com)

Valtteri, who has the height of 1.73 m, tied the wedding knots with a girlfriend after dating her for six years. They exchanged the wedding vows on 10 September 2016 at St.John's Church in Helsinki.

Don't Miss: One Up for Love! Aspiring Car Racer Brad Keselowski gets Married to his Longtime Girlfriend Paige White

In September 2018, the couple marked their two years of togetherness as a married couple. Valtteri, who has a net worth of $20 million, tweeted a photo on his Twitter from his wedding day.

Well, the married couple appears to be content in each other's presence and getting along well since they exchanged the wedding vows. However, the couple has not made any statement yet on starting a family together.