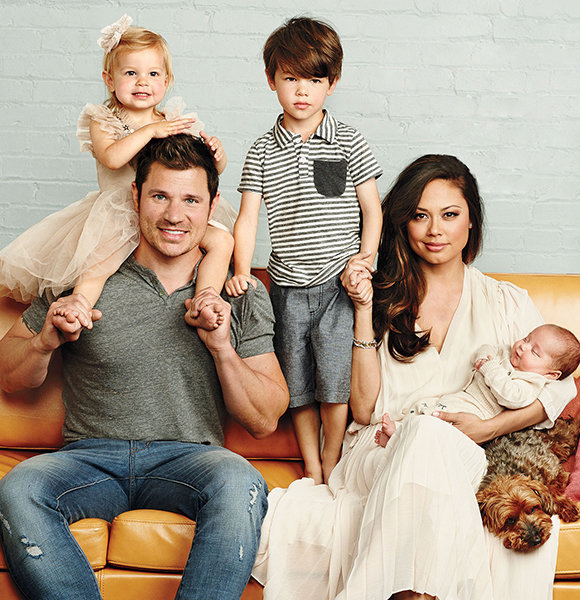 Vanessa Minnillo is a television personality, fashion model and an actress.

Further, she is also the winner of Miss Congeniality and Miss Teen USA 1998.

The two first met while filming a music video for Nick's song, What's Left of Me, in 2006 and connected instantly. At the occasion of MTV's New Year’s Eve show, the couple went public with their relationship.

After dating for five years, they finally tied the knot on 15th July 2011. They held the wedding ceremony on Sir Richard Branson's private island in the British Virgin Islands.

The couple pronounced each other husband and wife at the top of a cliff overlooking the ocean, in front of a small group of close friends and family.

Vanessa's husband, Nick Lachey, is best known as a member of the 90's popular pop boy band 98 Degrees. He has also released two albums as a single artist, SoulO, and What's Left of Me.

Before getting married to Vanessa, the singer was previously married to Jessica Simpson.

More About Nick And Jessica:- Nick Lachey's Married Life Details with Ex-Wife Surface a Decade after The Split!

But their four years-long marriage ended with a divorce in 2006.

Vanessa is a mother of three kids with her husband, Nick. Finally, her youngest son, Phoenix Robert Lachey, was born on 24th December 2016. But the youngest Lachey was born ten weeks prematurely and had to spend six weeks in the hospital's NICU.

According to Celebrity Net Worth, Vanessa's career as a TV personality, model, and actress has rendered her a net worth of $10 million.

Vanessa was born Vanessa Joy Minnillo on 9th November 1980, at Clark Air Force Base in the Philippines.

She is the daughter of former Air Force member Vincent Charles Minnillo and Helen Ramos Bercero. She grew up alongside her adopted brother, Vincent Jr., who is two years older than her.

Her parents got divorced when Vanessa was six years old. Initially, she was raised by her mother, who was awarded the custody of Vanessa and her brother.

But, when Vanessa turned nine years old, her mother reportedly left the two kids at their father's doorsteps and never looked back.

Ever since then, Vanessa has been estranged from her mother. In fact, when she got married to Nick, her mother was not even invited to the wedding.