By LRU Writer | On: July 14, 2019
Victoria Pedretti is an american...she was born in...graducated with a degree in...she rose to fame with Netflix's...will also appear in Quentin Tarantino's movie... 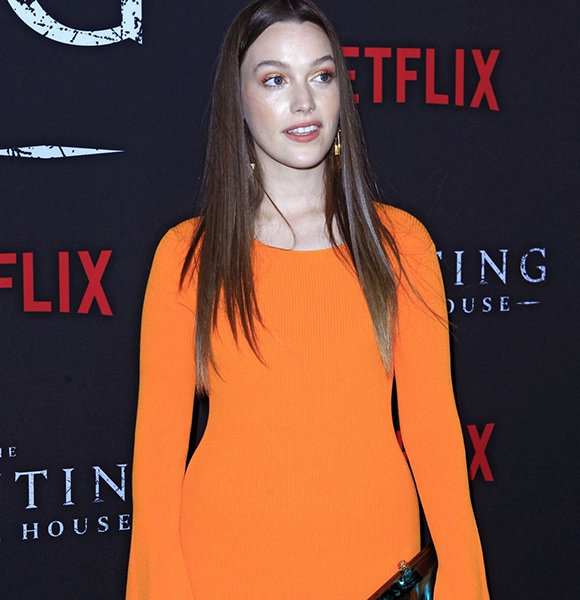 Rising to fame as Eleanor "Nell" Crain via Netflix's TV series The Haunting of Hill House, Victoria Pedretti is an American film and television actress.

Although she came to the limelight from 2018, the actress has been involved in the industry from 2014. She had debuted with the lead role in a short movie, Sole.

Victoria is an American by nationality. The actress was born in the city of Philadelphia in Pennsylvania, USA, in the year 1995. She celebrates her birthday on the 23rd of March.

She grew up in a family of four. Although not many details of her family have been revealed yet, there are a few details here and there. Her father’s name is Michael, and he was a professor. She also has a sibling, a sister.

Another Netflix Star:- King Bach: Every Dating Affair and Girlfriend This Viner Has So Far

As for what is known, the beautiful actress of age 24, stands with a fantastic height of 5 feet 4 inches (1.6 m). On top of that, she has gorgeous blue eyes and the vocal range thats suits Soprano/Belter.

For her early education, Victoria attended Pennsbury High School in Fairless Hills. She started her acting studies at the Carnegie Mellon School of Drama in Pittsburgh, an institute associated with Carnegie Mellon University.

She graduated with a Bachelor of Fine Arts in 2017.

The same year, the fresh graduate landed the role of Eleanor "Nell" Crain in the Netflix horror series The Haunting of Hill House. The show skyrocketed Victoria into the stardom of Hollywood. In January of 2019, the actress managed to bag the lead role of Love Quinn on the second installment of the another Netflix thriller series You. She also got the part of "Leslie Van Houten," in Quentin Tarantino's movie Once Upon a Time in Hollywood.

Even though the actress has a very young career, she has managed to bag herself an impressive amount of fame.

It would not be wrong to assume that she will continue to land more parts in TV shows and movies, left and right, and have a very successful career in the showbiz. However, her salary and net worth remain confined as of now.

As a new face in Hollywood, it does not come as a surprise that fans would want to know everything about her. However, the actor has managed to maintain a level of secrecy.

On screens of The Haunting of Hill House, she has been seen having an affair with Penn Badgley. The couple are set to be romantically linked in season two of the Netflix show. However, their romance only lives on the screen as Penn is married to Domino Kirke in real life.

Still, at an early stage of her career, it could be that the actress is focused on moving her professional life forward rather than her personal one. She has not been a subject of rumors or been linked with any boyfriend as of yet.