Mary Calvi Shares How She Makes Time for Her Family Despite Demanding Career! Take a Look 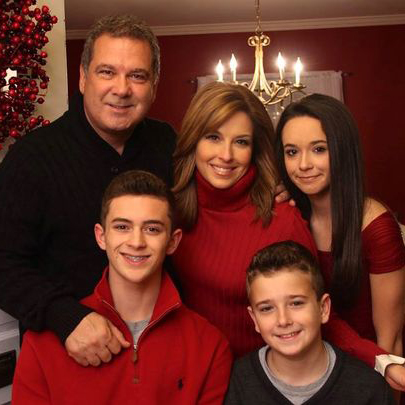 Winning nine Emmy awards for her work as a journalist, Mary Calvi is a big name in the world of journalism.

With a strong dedication and passion for her work, Mary thus stands today as one of the most popular faces on television. However, with this being said, her demanding professional life is no piece of cake.

But, despite having to dedicate a larger chunk of her time and energy to her work, the journalist and her husband perfectly handle their family life. So, who is Mary Calvi married to, and what is the couple's approach to work-life balance?

Mary is married to Mike Spano, a former member of the New York State Assembly and recently the 42nd Mayor of Yonkers, New York. With her husband, Mike, she has three children, two sons, Michael and Christopher, and a daughter, Alexandra. Despite being a renowned media personality, the journalist and her husband choose to keep their personal life out of the limelight. But, she did not hesitate to share a few of her personal details when it comes to building a resounding family.

In an interview in 2014 with WAG, the journalist shared,

We may both have busy lives, but we always find the time to be together. As two full-time working parents, it definitely gets difficult at times but we always make it work. It’s what makes our hectic day worth it.

Further adding to her parenting approach, she commented,

For most of our parenting lives, our discussions have focused first on diapers, then on getting the kids to ballet and hockey. We rarely have time, if ever, to discuss politics.

Don't Miss: Alex McLeod Content With Soon-To-Be-Husband! Any Plans On Getting Married?

With such dedication to parenting, it's no wonder Mary and her husband are able to create a healthy relationship with their kids.

The couple met for the first time at a Colombus Day Parade in Yonkers.

At that time, Calvi was Miss Colombus, and her now-spouse was running a bicentennial committee. So the couple waited till Calvi graduated and started dating since then. The family of five currently lives together in Yonkers, New York.

She graduated with a degree in broadcast journalism from S.I. Newhouse School of Public Communication in June of 1989.

By profession, Mary is a journalist and co-anchor for CBS News. Mostly known as a woman who works hard, she has exceeded everyone's expectations not just by the number of awards she received but also by her devotion to her work even today.

Mary is currently the First Lady of the City of Yonkers, an American Journalist, and now co-anchors CBS2 This Morning and CBS2 At Noon at WBCS-TV in New York City.

With years of experience in her bag, Mary has recently decided to expand her talents to other fields.

The book, set to release on 12 February 2019, recounts Mary Philipse's relationship with George Washington, based on historical accounts, letters, and personal journals.

Stay with us to get more updates on Mary Calvi!