Who is Aaron Phypers? Bio of Denise Richards' Husband and Their Wedding Details

By LRU Writer | On: September 09, 2018
Congratulations are in order for the newlyweds, Denise Richards, and...announce their marriage on 8 September 2018, two after the news of their...She was previously married to Two And A Half Man actor...Their wedding will be televised in the upcoming season of...Denise’s husband Aaron Phypers, by a job, is...According to Aaron’s bio, he was born... 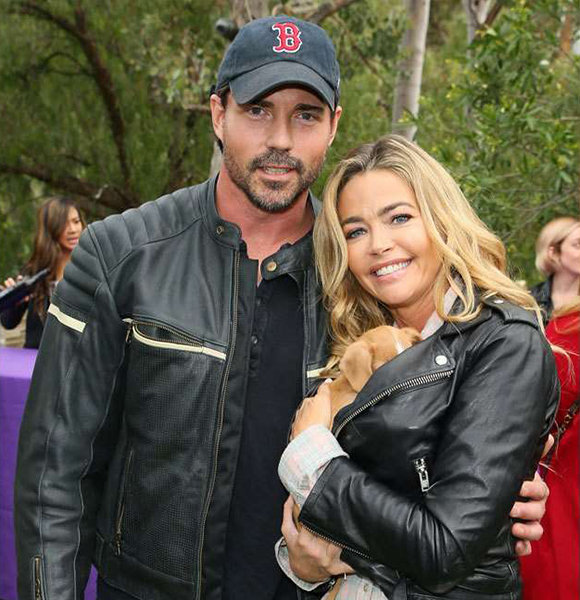 Congratulations are in order for the newlyweds, Denise Richards, and Aaron Phypers!

American Actress Denise Richards, age 47, and her beau, Aaron Phypers, age 46, announced their marriage on 8 September 2018, two days after the news of their engagement was made public. The pair got married in Malibu, in an intimate ceremony, surrounded by close family members and friends.

The guest list included carious Hollywood royalties, including the likes of Lisa Vanderpump, Camille Grammer, Rebecca Romijn, and Jeremy O’Connell in the attendance. Denise and her husband, Aaron look blissed as they pose for wedding photos (Photo: tmz.com)

For the ceremony, Denise adorned a flower embroidered strapless Mark Zunino gown, which had taken just 24 hours to sew. While her husband, Aaron went for a casual look in a white t-shirt and light jeans.

Speaking exclusively to The Daily Dish, after her wedding, Denise -- who has been cast as a new member for the season 9 of the hit Bravo reality series The Real Housewives of Beverly Hills - addressed the marriage rumors saying:

Yep, the rumors are true! This is my husband Aaron, and we just got married. I am so happy to officially be married to the love of my life.

The Wild Things actress and her husband, Aaron first began dating in 2017. She was previously married to Two And A Half Man actor Charlie Sheen with two kids (Sam and Lola Rose Sheen) from 2002 to 2006. She also has a daughter named Eloise.

Aaron was previously married to The Real Housewives of Beverly Hills star Nicollette Sheridan. Their divorce was finalized just last month, after 2 and a half years of marriage.

Denise, who has a reported net worth of $12 million, has never shied away from showing Aaron off on her social media. Denise, a mother of three, shares a tempting snap of her then-boyfriend, Aaron on Instagram (Photo:- Denise Richard's Instagram)

Back in June 2018, the Wild Things actress had put up an Instagram post of her then-boyfriend sleeping shirtless with an adorable caption.

A week earlier, she shared a picture of them kissing on Instagram and had called him a soul mate. The caption read:

Summer vibes! Love going into my favorite time of year with this guy @aaronwilliamcameron #soulmate

Their wedding also had camera lenses all over and will be televised in the upcoming season of The Real Housewives of Beverly Hills, which is slated to be dropped later this year.

Denise’s husband Aaron Phypers, by a job, is an actor. His most notable came in the Mark Hanson directed short flick titled The Leap(2011), where he portrays a character named Brett.

Aaron has also starred in the episode of American documentary series Air Emergency. Likewise, he has made appearances on Bravo’s The Real Housewives of Beverly Hills alongside with his ex-wife and British actress Nicollette Sheridan.

The Leap actor and Nicollette had married in 2015. Following six months of blissful marriage, the ex-flames separated in early 2016 and divorced two years later.

According to Aaron’s bio, he was born on 16 September 1972. As for his family, it appears that he’s a maiden child with family origins that can be traced back to the Greater Los Angeles Area, California.