By LRU Writer | On: August 22, 2018
April Love Geary is going to be the famous Momma for the second time on partner's birthday! The 24-years old April Love Geary and her famous boyfriend Robin Thicke are expecting their second child after welcoming the first child just six months before. 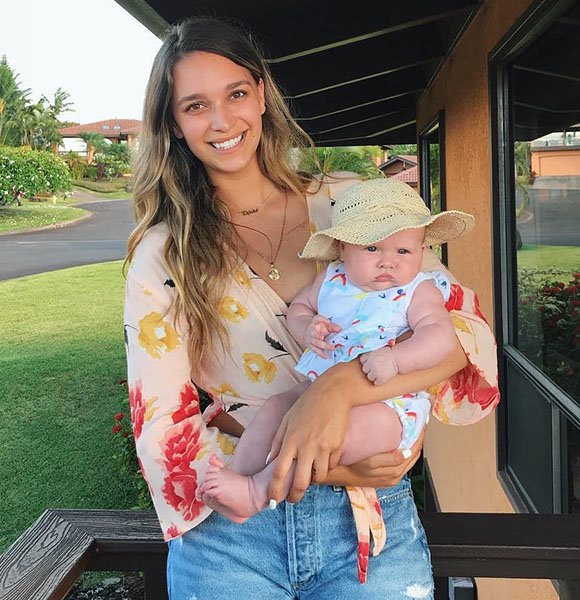 April Love Geary is going to be the famous Momma for the second time on her partner's birthday!

The 24-years old April Love Geary and her famous boyfriend, Robin Thicke are expecting their second child after welcoming the first child just six months ago.

The happy mother confirmed the big announcement on Instagram on 21 August 2018. The California, United States native shared the video and a snap of her six-months daughter Mia Love as she held the sonogram on her hand. The caption read:

“Well someone is going to be a big sister next year! We’re so excited to share with y’all that I’m expecting again!”

Additionally, the model disclosed that they had known the gender of their bundle of joy but questioned the followers what they are going to have next. As a bonus, she revealed that the due date is on her boyfriend Robin's birthday this year. Also in the video, April asked the little Mia if she is excited to be the big sister.

The parents of the beautiful baby Mia started dating after Robin Thicke separated from his wife of 10 years, Paula Patton in February 2014, with whom he shares an eight-year-old son Julian Fuego.

See Also:- Gavin Houston Reveals That Daughter Is His Source Of Inspiration; Has A Girlfriend Or Is He A Gay?

Actress Paula filed for the divorce in October 2014, and their divorce was finalized in March 2015 following a lengthy custody battle over their son which was later resolved.

Thicke and Geary made their public debut as a couple two months after the divorce at the Cannes Film Festival after dating for over a year. The couple's age gap is 18 years, but they have proved that age is just a number. The pregnant mom previously joked about the 18-year-age-gap with her 41 aged partners in April 2017 along with the snap from their Maldives vacation, writing:

“We’re out here LIVING while most of y’all are still bothered by an age gap.”

After the couple welcomed their bundle of love, Mia on 22 February 2018, the model has been advocating about breastfeeding. April shared the picture of her breastfeeding her daughter and also was criticised for sharing the nude photo.

But she confronted her criticiser and wrote on Instagram on 22 April 2018 that:

"maybe the next time you want to criticize me for posting a picture of myself breastfeeding you should really take a look at the pictures you've had taken. Not that taking nudes are wrong! The naked body is a beautiful thing! But don't be a hypocrite mama."

After a day, the model gushed about the nursing for her daughter and described that boobs are for babies, not for your husband and further mentioned that if you can't be a mother, then it's all yours.

“It’s such a shame that the world sexualizes a woman’s breast so much. Boobs are for babies, not your husband. And to the women who can’t have babies/breastfeed/etc, your boobs are yours. Your body is yours. If you can’t breastfeed, you are no less than someone who can.”

Since April is pregnant with her second child, the couple is not yet ready to jump into the married life. But the rumors have it that the couple is already engaged after Life & Style Weekly reported the couple to be engaged to get married in 2015.