By LRU Writer | On: July 31, 2018
Kaley Cuoco gets married in a fancy wedding! The Big Bang Theory actress walked down the aisle with the professional equestrian, Karl Cook at a family event near San Diego, California. 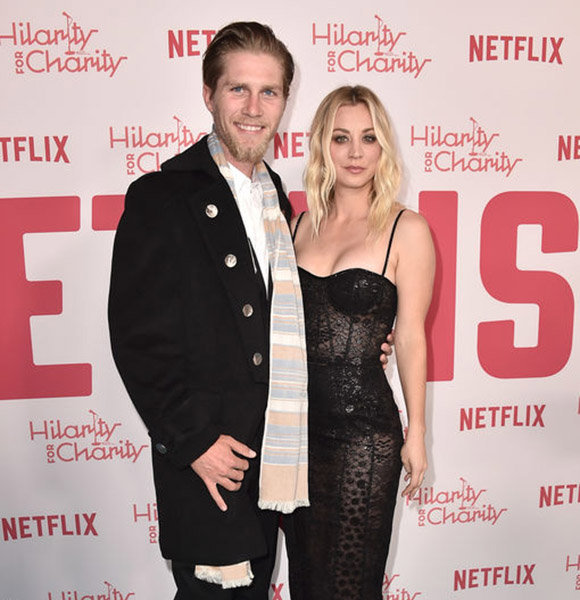 Kaley Cuoco gets married in a fancy wedding!

The Big Bang Theory actress walked down the aisle with the professional equestrian, Karl Cook at a family event near San Diego, California. The ceremony accompanied by friends and family was held at a horse stable on 30 June 2018.

For the wedding, Kaley looked perfect wearing a white lace dress with a cape by Reem Acra and designed by Brad Goreski and Daniela Romero, whereas Cook flaunted his classic looks in a tuxedo.

You May Also Like:- Who is "The Big Bang Theory" hottie, Laura Spencer's off-screen Boyfriend? Husband Rumors?

The partners shared a passionate kiss as horses in the stable witnessed their romance. Cuoco later dressed up in a lace Tadashi Shoji jumpsuit and Louise et Cie shoes for the reception.

Moments of laughs and cries arose as the couple read their vows. Kaley could be seen momentarily giggling and crying while the newlyweds were being pronounced as husband and wife.

Kaley's younger sister, Briana Cuoco acted as both, the officiant and bridesmaid in the couple's wedding ceremony.

Kaley and Karl first met at a horse show and started dating in early 2016. The pair announced their relationship in September of the same year. The couple got engaged in November 2017 after dating for a year. Later, Karl made the wedding proposal to Kaley with a diamond ring.

Cuoco's onscreen husband and ex-boyfriend, Johnny Galecki aka Leonard Hofstadter of The Big Bang Theory congratulated the life partners on their wedding. He shared a picture along with the newly wedded couple expressing his deepest congratulations. Kaley Cuoco along with husband Karl and Johnny on her wedding (Photo: Johnny Galecki's Instagram)

Along with Johnny, Kaley's TBBT co-stars Mayim Bialik and Wil Wheaton also joined the couple and shared moments of the wedding on social media.

Kaley, who enjoys a net worth of $55 million, was previously married to former tennis player Ryan Sweeting on 31 December 2013. The former partners separated in 2015 after remaining married for 21 months, with the actress filing for divorce in September of 2015.

Karl, the second husband of Kaley, is the son of software billionaire Scott Cook and mother, Signe Ostby. The 27-year-old is a professional horse rider and five years younger than his wife. He is set to inherit his father's empire of $1.97 billion.

Read Also:- Kevin Sussman Hints Ending Married Life With Wife; Has A Partner Now Or Is He A Gay Man

Kaley Cuoco has recently celebrated her one-month wedding celebration on 29 July 2018, to which her hubby took it to his Instagram. Sharing the image of the couple, Karl wrote a beautiful caption,

Meanwhile, Kaley, who injured her right arm, posted an Instagram video on 24 July 2018 of working out in the gym writing a caption,

"When your doc scolds you for not wearing your brace. Alrighty then guess we’re doin it this way!"

She was slammed for not wearing a bra with offending comments like "'Nipples on point," to which she took no time to respond.

"FYI because of my shoulder, I can only get certain bras over my head NOT THAT IT'S ANYONE'S BUSINESS"

The actress shut down the criticisms right with grace.