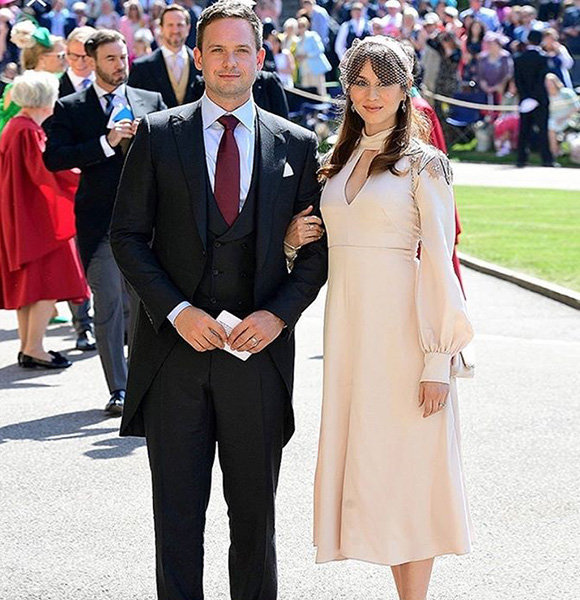 Actor Patrick J. Adams and wife Troian Bellisario are expecting their first child together after being married for almost two years.

Shackles of speculation were made about the pregnancy in late May 2018 after the photographers spotted the husband and wife on the Mykonos' beach. Suits actor was frolicking through the water with his wife as she covered her tiny baby bump under a chocolate-brown one-piece.

Since the news about the expectancy of the first child went viral, Troian has been cautious about uploading the pictures on the internet. She has taken a scoop from sharing the pictures of her midsection on social media.

The couple was last spotted together in London, England attending the royal wedding, showing their respect to Adam's TV wife, Duchess Meghan Markle and Prince Harry on 19 May 2018. The 37-year-old Patrick first met his 32-year-old wife on the set of the play, Equivocation in 2009 and since then they were dating. And after three years of staying as girlfriend and boyfriend, they got engaged in February 2014.

The soon-to-be parents exchanged the wedding vows in December 2016 in front of their family and family in a rustic, camping theme ceremony near California's central coast.

The real-life partner has also worked together on the screen which, Troian gushed that she liked working with her husband. While promoting the sci-fi film Clara, where both of them has appeared, she stated to The New Potato in 2017:

“What’s not to like about working with Patrick? He is talented, intelligent, funny, handsome, so that makes my job across from him easy to do, and he is my best friend so every day was a blast”

Similar to Duchess Markle, Patrick also left Suits at the end of season 7 citing to spend more time with his wife. He talked to The Hollywood Reporter in January 2018 stating:

“After seven seasons — really, eight years of being away from home and away from my now-wife and there was that pressure. At the moment, I’m interested in taking a break. It’s nice to be home. It’s really nice to be with Troian, our dogs and to take the time to figure out exactly what shape I want to take my career after this.”

Since the family is expecting their bundle of joy, the father-to-be actor is looking forward to giving his time to his expectant wife.