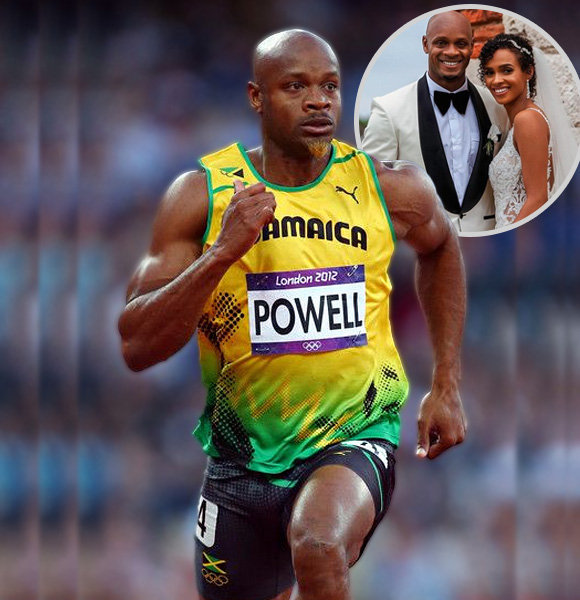 Asafa Powell, a world-renowned sprinter, is a well-respected athlete on the track and the most loving father and husband off-track.

The pro-sprinter even has a Youtube channel, together with his wife, where they post videos of their everyday life, his wife's work behind the scenes, their training, etc.

So let's discuss Powell's family life, his bond with his children, and how he enjoys his life with his partner!

Who Is Asafa Powell's Wife?

Asafa married Canadian model Alyshia Miller on February 16, 2019. After almost a year of engagement, the couple tied the knot in an intimate ceremony in Montego Bay, Jamaica.

According to The Gleaner, both had been seeing each other since 2015 before they decided to take the next step in their relationship.

The husband and wife duo celebrated their second anniversary this year, and the sweet social media mentions only show how strong they're going to date. The couple has two beautiful sons together, Amieke Powell and Azhaf Powell, and the proud father's socials are filled with cozy family moments.

Asafa frequently shares his moments with his kids on Instagram accounts, but Amieke and Azhaf are the only kids he has. He is also a father to his two additional kids from his past relationship.

In 2016, Asafa Powell posted a picture of his two children on Facebook, basically revealing that he was already a father to a son and a daughter. He wrote in his caption,

A lot of you may not know but I do have a son. My kids are everything to me and all I want for Valentine's Day. My personal life has nothing to do with my professional life so it's really nobody's business, but today I'm posting my Valentines ... Meet Avani Powell and Liam Powell. # myheartbeats #prouddad.

However, in 2020, Asafa was summoned to the court over charges of child negligence.

His baby mama Amita Persaud-Webb alleged that he was not taking care of their daughter.

Even though Powell has been paying the required child support fees, the mother of his child asked the court to raise the costs from JMD 25,000 to JMD 40,000.

Although the case details are unclear to this date, the athlete requested a paternity test, represented by attorney-at-law Annaliesa Lindsay.

This whole allegation on Powell raised eyebrows as he was always known to be kind and caring to all of his four kids. The case was settled after almost a year in 2021, and the Jamaican sprinter also released a Youtube video addressing the situation. He debunked all the rumors about him not taking care of his babies in the video, saying,

In the same video, he also clarified that the mother of his other two babies was not his ex and pleaded with the public not to label them as ex-couple.

Get to know - Angela Alsobrooks Is an Inspiration to Her Daughter

The professional runner lays most of his personal life bare to the public.

Whether it is an anniversary, birthday, or just a mindless post, Asafa loves to frequently show off his family on the Internet.

Not only that, he steps up and addresses rumors that normally surround a public personality like himself. This gives us a good reason to believe Powell is dutiful and loyal towards his wife and kids; his love is not questioned at any cost.