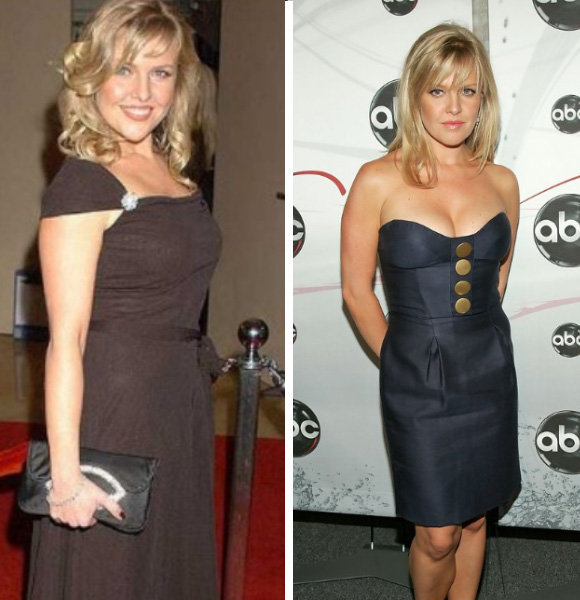 Scottish actress Ashley Jensen came to the limelight for her portrayal in Ugly Betty. Amid her generously flourishing acting journey, she grabbed quite a lot of attention for the weight loss she went through several years ago.

As Mirror reported in a 2011 article, the actress had gone through a weight loss of 2.5 stones.

Well, Ashley has always been unapologetically and unabashedly herself in all regards, whether before or after her weight loss.

Giving contrast to her weight loss transformation, Mirror displayed a before and after picture where she looked drop-dead gorgeous in a strapless black dress.

Well, one thing in common in the contrasting pictures is the confidence and down-to-earth aura that she proudly carries wherever she goes. Before and after weight loss pictures of Ashley Jensen (Source: Mirror)

Standing out is not as easy in the entertainment industry, where competition is inevitable. However, the actress who has already contributed decades of her life to entertainment stands tall with the humongous success she garnered throughout the years.

It is well known that success is not an easy feat to achieve in the show biz, while the actress also feels that 'we are in a narcissist society based on looks rather than kindness and goodness.'

Despite never being told to lose weight or go for plastic surgery, LA's fashion and beauty trend had her feeling disappointed.

As looks are one of the aspects that dominate the show biz, the impression of that has left her feeling 'strongly about having to physically inject things into your face to make yourself look 25.' But the Love, Lies & Record actress also believes that being in the comedy has helped her be who she is regardless of her strong feelings towards botox and plastic surgery.

The Extras actress once noted that she never felt the 'pressure to change what she looked like and hoped to have the dignity to maintain that.'

While she made her point clear on superficial beauty that the entertainment industry craves, her admirers are reluctant to learn more of her secret behind her weight loss which will probably surprise you.

Witnessing her well-toned stunning physique, anyone might conclude that gym is her regular thing. But, in fact, the reality is far behind.

Talking in a Good To Know segment back in 2015, the actress made it pretty clear that she is not a gym person.

She admitted being guilty of not working out. But she also said that being a working mom also partly made it difficult for her to squeeze in exercise in her busy schedule.

As she has always remained unaffected by the beauty standards widely followed in the business, she said that a few lines around the eyes do not bother her. Rather than hiding aging, she remarked, 'we should embrace the lines on our faces and our blobby tummies.'

Although she has a different mindset on looks and self-presentation in Hollywood, she does not deny the necessity of exercise in her life.