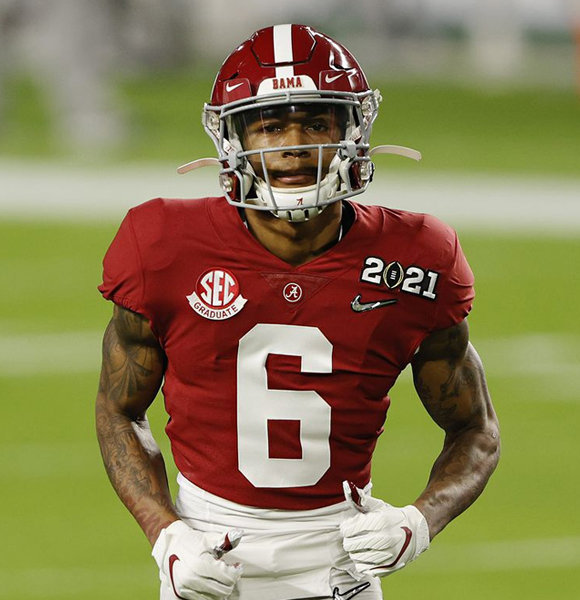 Famous football player DeVonta Smith has been in the hearts of football lovers for a long time now. People go crazy over his performance in the field.

However, the fans are curious about his romantic life and family. Being a popular footballer, Smith has touched the hearts of many, and they want to know more about his personal life.

Although he has kept the details about his girlfriend a secret, we can find bits and pieces of information about his relationship.

Who Is DeVonta Smith’s Mystery Girlfriend?

The passionate footballer is very private about his romantic life. However, it is a known fact that he has found his other half already.

Although the details of his girlfriend are unknown, her name is Mariah Abraham. The couple has been in a relationship for a long time now.

According to several sources, Smith's girlfriend, Mariah is very close with Smith’s family, and his family also loves her. Mariah especially bonds well with his mother and spends time with her. His fans can now expect Smith to announce his wedding to his beloved girlfriend any day now. Words aren’t enough to describe how special it is what they have.

Smith has been saving his beloved from the eyes of the media for a long time, but we might soon see him and his girlfriend walk into the new beginning of their relationship.

Although Smith and his lady love are not seen together, his fans are already loving them as a couple.

There have been rumors of him having a daughter with Mariah, but those are all rumors. If he were a father, he would have mentioned it or even hinted, but Smith has not given any indications of him being a father yet.

Although Smith does not share much about his love life, he is seen expressing love towards his family on his social media.

Who Are DeVonta Smith’s Parents?

Smith was born and raised in his hometown, Amite City, Louisiana. His parents are his father, Kelvin Dickerson, and his mother, Christina Smith Sylve.

Unfortunately, his parents split up when he was a young boy. However, they didn’t let their divorce affect their son’s grooming. On the contrary, they remained good friends and even better co-parents.

Smith has always had his father by his side during his entire career. Moreover, he has had many cherishable memories with him during childhood.

His father, Kelvin, worked at a car detail shop and this was the reason why Smith only saw his father on weekends. However, Kelvin made the most out of the little time he managed for his son.

He would take DeVonta to the woods, exploring the wildlife. The father-son duo would catch a fish, cook crawfish, and circle in the dirt. Smith mentions that he felt like a man rather than a boy during these memorable times.

When DeVonta won the Heisman Trophy, his parents were recorded celebrating his son’s achievement in the audience.

Similarly, Smith’s mother was a social worker during his high school years. Unfortunately, she wasn’t supportive of his career as a football player in the beginning but now like every mother DeVonta's mother is also very proud of his son.

Likewise, Smith is also very appreciative of his mother's career as a social worker.

Regarding her work, he stated,

“I think it made me a better son, just because knowing the things that go on in other people’s households, I just didn’t want to put my mom in a situation like that”

He loves his mother dearly and never fails to express his love for her on his social media handles. In an Instagram post, Smith wrote,

“To the world, you are a mother, but to me, you are the absolute world.” Now, she is the proudest mom about her son’s success in the NFL, and Smith has left no stones unturned when it comes to showering love towards his mother.

Back when Smith signed a contract with the Philadelphia Eagles, he bought a house and surprised his mother.

Such a heartwarming gesture by a son to his mother indeed.