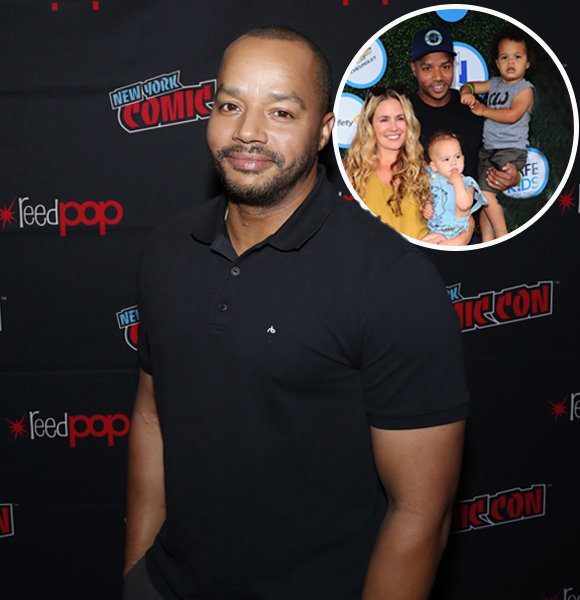 Multi-talented Donald Faison is famously known for his portrayal in the hit comedy series 'Scrubs' as Dr. Chris Turk.

With years of fame comes the curiosity of his fans regarding his personal life, curious to learn about his married life with his wife and kids.

Follow through to find all the details about the actor.

Who Is Donald Faison’s Wife?

Faison is currently married to his beautiful girlfriend, now wife CaCee Cobb, since the year 2012.

The couple first met in 2005 at Zach Braff’s birthday party, and the adorable thing is; that the same person whose birthday brought the duo together also gave his backyard as the perfect place for the couple’s wedding.

The duo’s marriage ceremony took place in Los Angeles in Braff’s backyard with a look back at home feeling and a Southern hint.

Explaining the ceremony, some of the guests stated,

“She wanted it to feel down-home.”

If we have to talk about the attire, the beautiful bride wore a magnificent strapless gown, and the groom rocked a bow tie with a black suit.

Read About: Judy Reyes Gushes Over Husband! Says He Makes the Perfect Parent

Walking down the aisle with an amazing work of art, the bride was accompanied by her father, Ed Cobb.

From destination to I DOs, everything was magical and perfect as the couple wanted it to be. And since then, the husband and wife have been together. Currently, partner Cobb shared an adorable picture with her partner wishing him a happy anniversary, captioning,

“9 years married to this handsome beau! Happy Anniversary my love, I love you always and forever #funandlaughterforever”

Talking about marriages, Cobb is not Donald’s only partner, as he was previously married to his first and late partner, Lisa Askey, from 2001-2005.

The details about how they met or anything about their wedding are kept away from the limelight.

With not much information about them, the couple eventually got divorced, and Donald married his current wife after seven years of separation from his first spouse.

Apart from the star’s married life, there are many questions regarding his kids.

How Many Kids Does Donald Faison Have?

Father to six kids and with the age of 48, Faison had his firstborn Sean Faison-Ince with his former partner, whose name is not disclosed yet in the media.

If we were to talk about kids with his current partner, Faison is the father of Rocco Faison and Wilder Frances Faison.

In 2017 Faison went through a heartbreaking loss when his former partner passed away. But, being a loving father, Donald spent as much time as possible with his three kids.

Speaking on his parenthood, Donald stated,

“As my kids have gotten older, I’ve become … not more opinionated, but I feel like I’ve had to use my experiences in life to explain to them why what they’re doing isn’t going to work,”

“But as far as being strict, no. And that’s good and bad.”

Nonetheless, their amazing parent-children relationship is probably the key to their happy family life.