Inside The Private Family Life of G. Garvin

By Asmita Neupane | On: October 25, 2021
G. Garvin, a renowned chef with astounding net worth, indicates that no matter what his daughter and son will always be his priority. 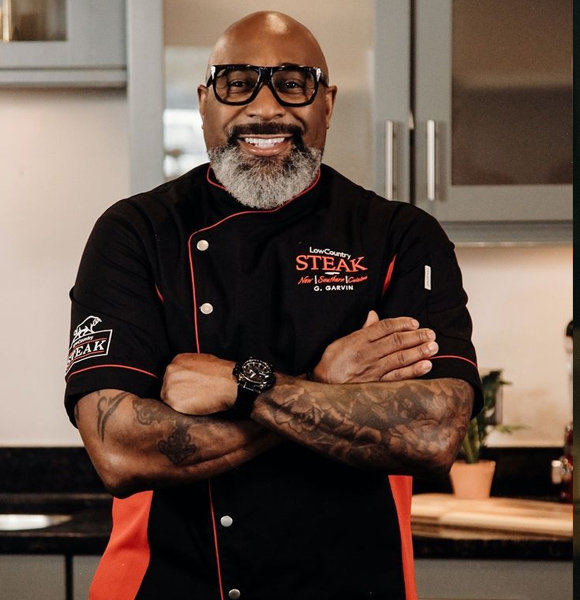 "It's not about you. Everything you do for your kids comes first," said chef G. Garvin on an episode of the They Call Me Dad series on the Ophra Winfrey network.

Needless to say, the chef is all about his family. However, the acclaimed chef is pretty private about his family life on his socials which has his fans questioning, ' Is G Garvin married?'

Though the reputed chef has garnered thousands of followers on his socials, many are oblivious of his family details as he is not very flashy about his personal life.

But, don't worry, fam! Here are some details of the chef's blissful family life for grabs.

What Do We Know About G. Garvin's Family?

The notoriously private celebrity chef is not as generous with letting out his family details on socials as he is with his delicious-looking recipes.

However, his fans can take solace from some of his social media posts that give a few glimpses of his family members.

The proud father to a daughter, Nola Miles Mlhaley, and a son, Maxwell, once took to his Facebook to share his family portrait on the occasion of the Christmas holiday several years ago.

The family portrait captured the pair's jolly moments with their kids. A perfect holiday card picture indeed. He completed the holiday post with a caption wishing his followers a happy holiday writing,

Hoping everyone had a wonderful day full of good food, friends, and family. From mine to yours, Merry Christmas -G Moreover, the chef's social media posts of his daughter, whom he calls his 'biggest supporter,' and his little son, stretch how well he embraces fatherhood.

In a nutshell, Garvin is a blessed man with an incredible family along with hard-earned prestige in the culinary world as a brilliant chef.

Acclaimed chef Garvin is a man of many titles. He is also an author, television personality, and philanthropist. Beginning his culinary career in Atlanta, his hometown, the chef later moved to California, working under chef Jean Pierre Dubray.

Garvin, age 44, took every opportunity to learn more and later on worked in Noa Noa's Sous Chef, Beverly Hills' the Four Season, and Kass Bah, to only name a few.

His promising career gradually grew into a massive success when he reached the point of starting his restaurant, G. Garvin's.

As his new business was on a quick rise, he got the chance to host high-profiled personalities, including former President Bill Clinton, Halle Berry, and the former prime minister of Isreal.

Ever since he has never looked back, and his career has kept on flourishing.

Given the popularity of his existing restaurants, the chef is sure to earn a hefty net worth though he has not yet revealed the accurate sum of his fortune.

Besides, his other sources of income also earn his books sales and products endorsements. Garvin, the host of Turn Up the Heat with G. Garvin, is indeed living his life with utmost luxury with his hard-earned fortune, but that is not all to the giving chef.

He is a firm believer in impacting people's lives for the better. As a result, even after reaching the heights of success, his down-to-earth personality reflects through his charitable works.

Talking about his initiative on helping the needy people with Ebony, the chef once remarked,

I think that helping people is important because I feel like we all need to be loved and appreciated. Not everyone is from perfect family situations and I think those of us who have more should do more.

While he is making big money from his astonishing career, he also knows how to positively impact others' lives using his accomplished career. Kudos to the chef. Witnessing the mark he has left behind, and the chef is sure to accomplish more with his humble and hard-working attitude.