By Asmita Neupane | On: November 10, 2021
Gerardo Otiz's staggering net worth has garnered massive attention from his fans, he is keeping his curious fans from knowing who his wife is. 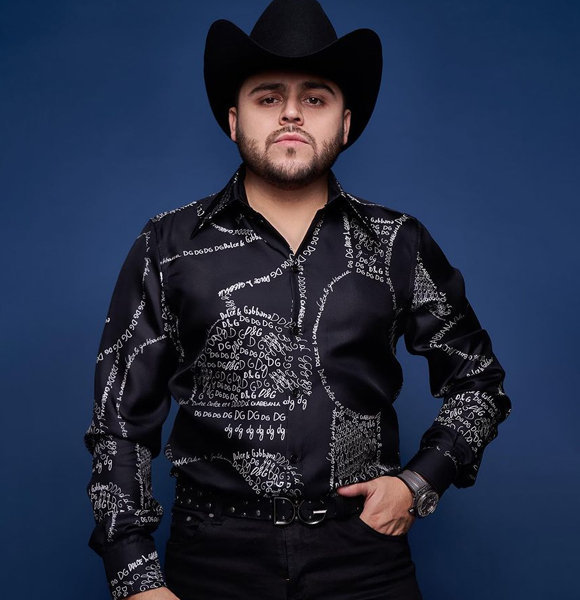 American-Mexican singer-songwriter Gerardo Ortiz’s decade-long career sure made him one of the sought-after artists in the music industry garnering him an impressive net worth. But it did come with a few ups and downs along the way.

From blessing his fans with head-banging hits to being in the spotlight for his controversial music video Fuista Mia, the singer’s career is only growing exponentially. Having been in the industry since 2009, Gerardo has peaked to the height many can only imagine, and his staggering net worth is certainty an eye grabber.

What Is Gerardo Ortiz’s Net Worth?

Beginning with a quick recap of his successful career that put his name in the shining lights, we should go back to 2009, when it all started. If you go through any Latin music charts, Gerardo is the name that frequently appears, reigning the top positions.

Releasing his debut studio album, Ni Hoy Ni Manana, in 2010, the artist has nine studio albums under his belt, along with three additional live albums.

From the moment he dropped his first album, which received a Grammy Award nomination under Best Norteno Album, he had already begun showing the signs of becoming a dominating artist.

Standing up to the expectations, his third album also was a mega-hit that received three prestigious nominations at Premio Lo Nuestro in 2012. Giving back-to-back hits, he yet again came to the radar after winning his first Premio Lo Nuestro for the song Amor Confuso in 2013.

The same year he bagged another award under the Norteno Artist category. Ever since, the streak of wins has never left his side. By now, you must have roughly guessed his net worth.

To be accurate, Gerardo Otiz, age 32, has garnered a net worth of 10 million dollars, as Celebrity Net Worth reports. His impressive fortune also includes the earnings from his YouTube channel that now has 4.33 million subscribers with over 2 billion views.

As per the analysis by Socialblade, the artist’s annual income from his YouTube channel ranges from 105 thousand dollars to 1.7 million dollars according to the number of views on the channel.

The two-time Grammy Award nominee has remained one of the top-selling artists since the release of his first album, which pretty much says all about his staggering earnings. But, of course, his multimillion-dollar net worth also includes his lavish home in Los Angeles, California, spread in a wide area.

Although his fans know about his lavish lifestyle and flourishing career, his personal life, on the other hand, is somewhat under the shadow.

Who Is Gerardo Ortiz’s Wife?

Given the amount of attention Gerardo has received for his professional life, his fan’s curiosity about his personal life is obvious. But, the singer has not yet shed light on who his wife or girlfriend is.

Regardless of keeping his love life away from the prying eyes of the media, the artist loves to flaunt his son on his social handles proudly.

His son, Santiel Ortiz, recently turned four. Taking the joyous moment of celebration of his son’s birthday to his Instagram on July 26, 2021, the singer shared adorable pictures of his little one. Likewise, he also treated his Instagram followers with another post with his son displaying the father-son moment. While his social handle is filled with several such posts, the artist, however, seems to be reluctant not to reveal who the baby mama is.

Even one of his fans took to Twitter desperately looking for an answer to who the singer’s baby mother is writing, ‘Someone please tell me who is Gerardo Ortiz’s baby momma!.’ But, to the fan’s disappointment, Gerardo has no plans to spill the tea on his love life anytime soon.

However, Live RampUp will be sure to update our readers on any details of the 'mysterious' woman whenever it is revealed.