Jonathan Roumie Has Not Found A Proper Connection With A Partner? 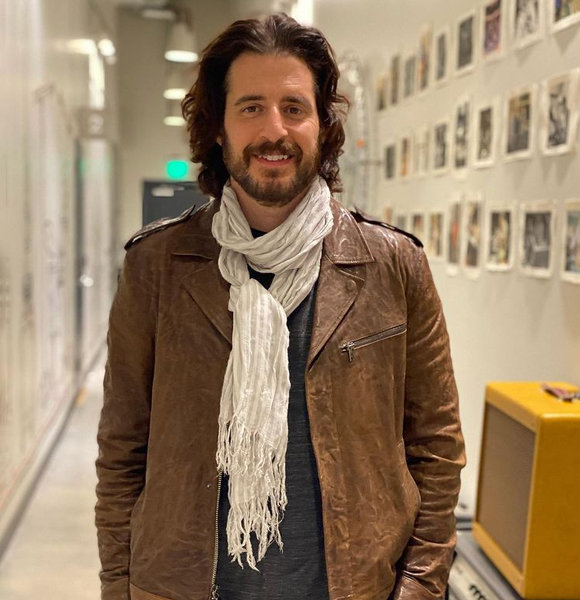 Primary known as a Jesus from his series, Jonathan Roumie's take on faith shows how important it is for him to have a partner that resembles the same understanding that he has for God. He quoted-

"I think it was actually through a number of personal relationships like you know girls that I dated... they might have identified culturally as christain but there was never that connection."

Jonathan Roumie In Search For A Christain Wife?

In a YouTube segment hosted by the channel Spiritual Direction back in July of 2020, Roumie sat down with the host of the show Dan and Stephanie Burke.

During the interview, they touched upon Jonathan's faith and how his faith in Christ increased and became more significant over time.

Roumie then later on in the segment described how he had never felt connected to any woman he had dated in the past as he never felt the spiritual connection with them despite them being Christian.

For context, Jonathan plays Jesus in the multi-season series about Jesus's life named The Chosen. It is also the highest crowdfunded media project of all time.

More Stories Referential To Jesus: Muhammad Ali: The First Pro-Athlete who asked, "Why is Jesus White?"

But this is not just a character that, as an actor, Roumie takes up on. Jonathan's will to play the role reaches deep inside his religion and faith towards the Lord himself and he multiple times explains how life-changing the whole experience is for him.

Talking about the portrayal of the humanitarian side of Christ that people hasn't seen before, he credited the writing and the script of the show and added,

Roumie's portrayal of Christ has landed him on a mark that is widely appreciated and loved by the audience, and since then he has garnered millions of fans.

Roumie's concept of having a partner looks quite clear now, and he wants to be spiritually connected with them and share the same faith that they do.

Coming in 47 years of age, Roumie might have found just the right one for him.

Roumie himself has not confirmed any details of his marriage. However, he might have found a wife finally.

As per a wedding registry on Bed Bath & Beyond records, a wedding between someone named Jonathan Roumie and Hannah Vanaroman was registered, however, the page has since been disabled.

But the most exciting part of the story is, we at Live Rampup actually did find something that could potentially lead to the confirmation of him having a wife.

Looking into a woman named Hannah Vanorman, we found someone on Facebook; however, her bio on Facebook states herself single.

But the most interesting aspect of it all, she has her cover picture [2021] of the series that Roumie plays, The Chosen.

Maybe we are reaching quite far with the hint as there is no confirmation, but merely speculation done by us.

But it is quite interesting to see the same name drop in the wedding registry and she being seemingly a fan of the show.

To be clear, we do not confirm any of the speculations made so far.

Roumie hails from a Christian family that has always been devoted to God and faith as his father was from Egypt and followed Catholicism from the very beginning.

Roumie hails from a Catholic family, and he himself follows Catholicism. His mother is Irish, and his father was a Greek Orthodox that went to Catholic school in Egypt.

In an interview with Aletia, Jonathan talked about how finding an Orthodox community was difficult for his father. However, since his father was raised with both Orthodox and Catholic beliefs, he was comfortable going to any; thus, he joined the Catholic Church.

He further added how he also wanted to go to Greek Orthodox churches often had it been available more.

" I made my first communion and confirmation as a Catholic and attend a Catholic Church. If it were more available, I would probably go into Greek Orthodox churches more often … "

The Chosen has already garnered a significant fan base for Roumie, and he feels the pressure of the growing fame on him as he says that it demands a greater responsibility to share his faith more.

The Historical drama airs on several streaming services and has two seasons with 16 episodes in total.