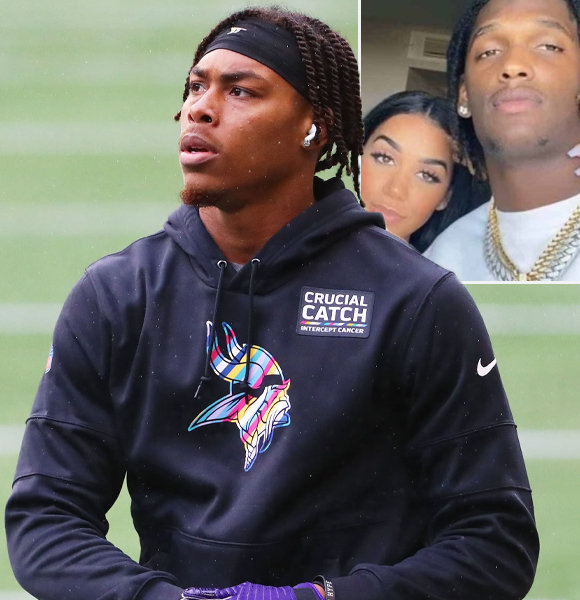 The Minnesota Vikings athlete Justin Jefferson’s impressive professional feats have never been out of discussion amongst his admirers.

But, most interestingly, Justin’s not-so-known love life is beginning to garner considerable attention having his fans curious if the NFL rookie is still dating his girlfriend, Tianna.

Justin Jefferson Still with His Girlfriend?

Although the NFL player and his beau Tianna Harris are not extensively flashy about their relationship, their occasional social media posts dedicated to one another speaks volume regarding the lovely couple’s togetherness.

Moreover, analyzing their social media presence, it seems as though the two began dating around 2020.

Tianna might not be found on Justin’s social media feed, but the NFL player often pops up on his beau’s social handles. On that note, Justin once displayed his admiration for his sweetheart, commenting fire emojis on her Instagram post of September 11, 2020.

Indeed the fire emoji perfectly suited the admirable mirror selfie of his partner, as seen in her ‘gram post.

Responding to Justin’s comment, she replied with heart emoticons. Well, that is not all to the couple’s sweet gesture for one another on socials.

In June 2021, Justin’s partner showered her love for her beau through her Instagram handle, where she was spotted wishing Justin on his 22nd birthday. Moreover, Tianna, an athlete playing for Kent State Women’s Soccer, also took to her Twitter on April 26, 2021, to flaunt her proud girlfriend moment.

Through her Twitter post, she shared a report that said Justin would be the ‘first NFL player featured in Fortnite.’ Overly excited for her man’s accomplishment, she expressed her happiness through her caption reading ‘super proud of you, this really just the start.’

Get to know - Lexi Thompson REVEALS Her Partner?

Their companionship seems even more flawless with their similarity of professional journey. Just as driven Justin is about his career, Tianna is no less of an ambitious young athlete who is already fueled up to establish her name as a brilliant athlete.

Her hunger for achieving greater milestones is clearly reflected in her Instagram posts. For instance, in one of her recent ‘gram posts, she shared how she strives to go a greater distance with her soccer career, writing, ‘Long way down from the heights I’m chasing.’

While Justin’s girlfriend is in the process of making a major debut in soccer, Justin, on the other hand, has been living the dream since 2020.

Having played in high school and college with impressive records under his belt, Justin’s professional journey with the NFL began after the Minnesota Vikings drafted him in 2020.

More on - Teddy Bridgewater and His Girlfriend Inspire Each Other

Although his career as an NFL professional has just started, the 22-year-old is already on the run with a multi-million dollar worth of contract deal.

As claimed by Bleach Report, Justin made his grand NFL debut with the Vikings agreeing to a four-year contract for 13.12 million dollars.

Receiving a 7.1 million dollar as a signing bonus with the Vikings, Justin Jefferson is already off to a great start with promising stats overall.