SNEAK PEEK on Kayvan Novak's Swoon-Worthy Chemistry with His Wife 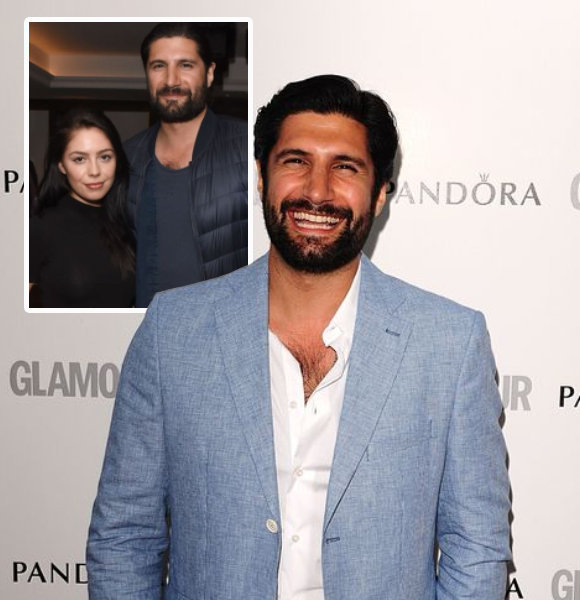 Famously renowned for his role in the comedy series, Fonejacker actor Kayvan Novak is reputed for his dedication and commitment, earning him tremendous respect and recognition in the show biz.

But, the same level of commitment gleams through his everlasting relationship with his wife, whom he has been married to for more than five years.

Kayvan Novak' Life with His Wife

Love is in the air, or in Kayvan's case, we might say love is all over his Instagram. So if you want to have a sneak peek of the actor's blissful love life, his 'gram feed is the perfect place to visit.

His social media feed is indeed a treat to his followers where he displays his romantic side through his posts dedicated to his beautiful wife, Talitha Stone.

On diving into his Instagram, a swoon-worthy picture of the actor and his wife sharing a heartwarming gesture of love is sure to grab your attention. The adorable upload he made came on their fifth anniversary on July 19, 2020.

Celebrating his love for his wife, the actor shared the joyous moment with thousands of his followers, who quickly responded to his anniversary post with thousands of likes and several comments admiring the beautiful bond between the couple.

Declaring his love for his beloved, he addressed her as the love of his life in the caption paired with the lovely picture. While the pair celebrated the fifth year of their holy union, 2021 marks their sixth year into their marriage, with a lifetime of together remaining to celebrate.

Likewise, another one of Kayvan's playfully romantic Instagram posts in the name of his partner is from Valentine's day of 2020, and of course, the actor could not miss out on wishing his 'eternal lover' on the special day. Posting a playful picture, where he impersonated a vampire while his spouse posed to the camera amusingly, he captioned a notorious caption to his Valentine's day upload writing, 'In all my years of pillaging I have yet to pillage anyone as delicious or in fact as nutritious as Talitha.'

The wholesome picture and his words are evident enough to imply they share a healthy bond as a married pair.

On the other hand, Talitha is no less in showering love to her 'hero' through her socials. Well, if you want some more of the couple's beautiful chemistry, then you might want to dive into Talitha's 'gram feed as well.

Flooded with endless memories of their happy life together, Talitha makes sure to treasure each one of her special moments with her beau on her socials, and we just can not get enough of their beautiful relationship.

Although they have been married for several years, they are yet to expand their family. But, for now, they are responsible and loving parents to their adorable two fur babies, a dog, and a cat. 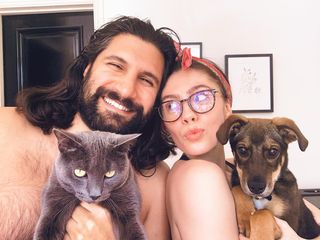 Kayvan Novak posing with his spouse, and pets (Source: Instagram)

Get to know - Nadia Parkes's Dating a Superhero?

Furthermore, stepping out from their social handle, the couple's chemistry can also be seen equally radiant whenever they make public appearances together.

In that regard, the couple once attended the premiere of Early Man in London, and they looked fabulous posing for the camera, holding each other.

As both of them belong to the entertainment, no wonder Kavyvan and his actress wife are understanding and respectful of each other's journey through their demanding careers.

Regardless, the fact that they have been maintaining a healthy relationship while handling their professional life with a balance is quite inspirational.