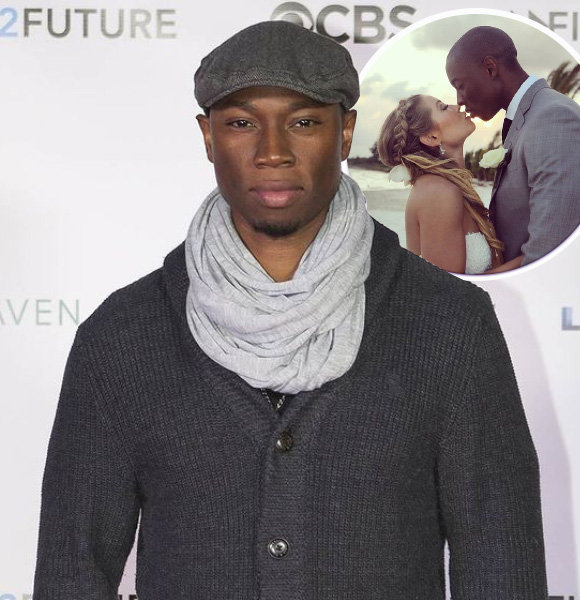 Ever since American actor Robbie Jones forayed into the big screens making his memorable appearance in One Tree Hill, his fans' favorite inquiries besides his proficiency have been 'is Robbie Jones married?'

Well, it's no hiding that the actor has been blessed with a joyous married life with his beloved wife and his Instagram posts are there to give away all the inside stories of his incredible love life that his followers had been searching for.

More so, his recent anniversary post dedicated to his loving other half is sure to melt your heart.

'A match made in heaven' is what you might recall while sneaking the Instagram feed of the One Tree Hill actor, which is flooded with swoon-worthy posts dedicated to his beloved spouse, Sandi Tucker.

One of such heart-melting couple moments is treasured on his recent 'gram post he shared on the occasion of his wedding anniversary.

Through the anniversary post of December 18, 2021, the actor proudly flaunted to the world that he had accomplished the five years mark of his marriage, with many more to come.

The proud husband uploaded an adorable picture of their wedding day where they stood at a beach, embracing each other with love.

While the picture spoke volumes about their blissful journey together, the beautifully written caption attached to the mesmerizing picture of the couple added a magical touch to Robbie's anniversary post.

Showing gratitude to God for blessing him with a happy married life, the actor wrote that what he shares with his wife is 'a lifetime of love' and that he feels 'honored' and 'blessed' to be her husband, 'today and every day.' Robbie Jones and his wife looking lovely in their wedding attire (Source: Instagram)

Get to know - Did Madeleine Madden Split with Her Partner?

Admiring their exemplary bond, several of Robbie's followers dropped their well-wishes on the comment section.

Well, the actor has been treating his followers with married life updates since December 2016 when he tied the knot with his wife, starting a new chapter of their lives.

Five years into their marriage, their love for one another has not aged by a bit. On the contrary, their affection for each other still gleams through their pictures on social handles, reflecting the undeniable bond between the two.

Interestingly, adding dollops of happiness to their married life is their daughter and son.

More on- All on Toby Stephens's Wife, Children & Past Issues

Ever since welcoming their daughter, Nicole Maroon Jones, in April 2018, the couple's life has never been the same. So to say, the addition of a new member of the family brought unimaginable happiness.

Recently, she turned three, and the proud father could not help but flaunt his adorable daughter on his 'gram feed wishing his' amazingly wonderful daughter' on her birthday. Likewise, after the birth of his daughter, Robbie was blessed with a son, Hendrix River Jones, in March 2021.

Robbie's Instagram feed is all about his family, perfectly reflecting the closeness he shares with his wife and children.

From his daughter's first dentist appointment to the glimpses of his son growing up, he has it all treasured in his social handle.

Amid all that, he also does not forget to appreciate his spouse for being the loving mother she is to their kids. Dedicating an Instagram post to his wife on the occasion of mother's day, the actor showered her with love and appreciation for being a 'phenomenal wife and mother.'

He sure is a huge television star, but the fact that despite a demanding career, he is able to maintain a healthy relationship with his family is exemplary.