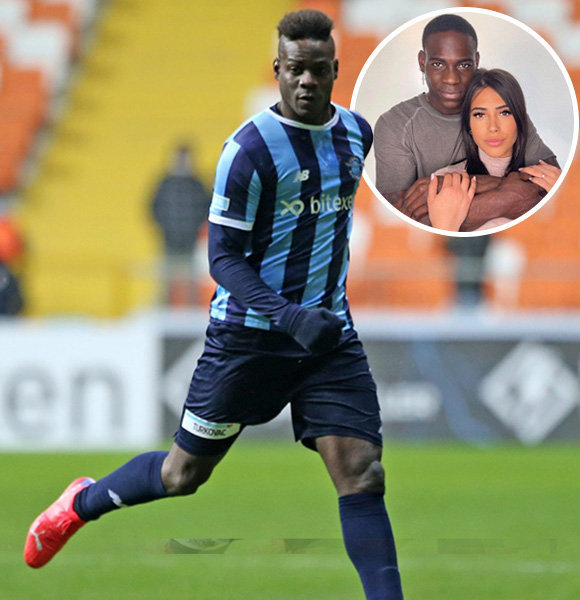 Mario Balotelli Barwuah is an Italian striker who currently plays for Adana Demirspor in the Super Lig and the national team of Italy.

Mario began his football career with Lumezzane and made his senior debut at 15 years old.

He debuted in the Serie C1 division in April 2006. He then had a trial with Barcelona but did not make it through the selection.

While his career accomplishments are well-known to many, let's learn more about his personal details, including his wife or girlfriend.

Mario Balotelli Has a Wife?

He doesn't have a wife yet, but once he was very close to getting hitched. The athlete was engaged to a reality TV star.

His ex-finance, Alessia Messina, with 500,000 Instagram followers, the 27-year-old is a model and influencer. She was featured in reality shows such as 'Temptation Island,' 'Grande Fratello' (Italy's Big Brother), and others.

Talking about his love life during a magazine interview, he said,

"I am engaged, and I am in love," the footballer quoted.

Balotelli and Alessia are said to have been dating for a month. He is claimed to have met her parents at their house in Sicily.

Moreover, he is a father of two children from his previous relationship with a Brazilian model, Dayane Mello. Mario Balotelli with his Previous Partner (Source The Sun)

Clearing up his relationship now with his ex-girlfriend, he said, "I don't want any interference. Let's be clear - I haven't seen Dayane for some time now."

However, the ship has sailed now, and he has been dating his new girlfriend, Francesca. The news of their breakup never circulated in the media.

Balotelli is the father of two kids; daughter Pia and son Lion. He welcomed his son in 2017.

Mario Balotelli was born on August 12, 1990, in Palermo, Sicily, to Ghanaian immigrants Rose and Thomas Barwuah. His family relocated to Lombardy when he was two years old.

They were destitute, and they couldn't afford to raise four children. Mario's parents decided to place him in foster care due to poor family background.

Silvia and Francesco Balotelli, who lived in the Italian town of Brescia, adopted him.

Mario met his biological parents every weekend for the first few years, but he quickly stopped and embraced Silvia and Francesco as his parents.

The athlete was promised a comfortable existence by the Balotelli family, who were wealthy.

Mario Balotelli is regarded as one of the world's best-dressed footballers. In 2012, he was rated the second best-dressed man by GQ.

Mario previously was in a relationship with Raffaella Fico, but it did not work out.

Later, she claimed to be pregnant with Mario's child. Pia, Fico's daughter, was born on December 5, 2012. DNA tests in February 2014 showed that Pia was Mario's daughter.

In March 2013, Mario married Belgian model Fanny Neguesha. The former husband and wife, however, split up in September 2014.

As of now, he seems to be dating his new girlfriend but there hasn't been much news about their link-up or if they plan to become husband and wife.

Well, only time will tell when this professional player will introduce his potential wife to the world.