A Huge Part Goes to Maxwell Simkins's Parents for His Success 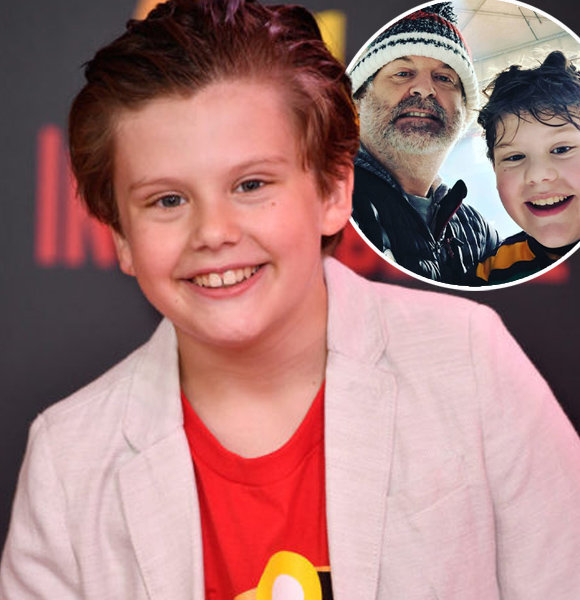 While child actor Maxwell Simpkins has blessed his viewers with awe-worthy performances on-screen, his Instagram handle displays his life away from the cameras.

It did not take any longer for the sixteen-year-old to set a mark in the industry as a brilliant actor, but his success in the industry would not have been possible without his parents' support.

Flaunting his inseparable bond with his parents, the child actor often takes to his social handle to shower his love and gratitude to his mother and father, which speaks volumes of his happy family life.

Maxwell Simkins's Love for His Parents

Born on October 17, 2006, Maxwell's mother and father are John Simkins and Hilary Simkins. Having been in the industry from the age of six, the child actor has appeared in numerous works, and each one of the roles he portrayed is a true piece of art.

However, his parents are also to be credited for the incredible journey Maxwell has embarked upon at such an early age. Identifying his creativity and artistry, the actor's parents helped him harness his acting skills from a young age and helped him pave his path in the industry with his debut in 2014.

Not many are lucky with such a supportive family, but The Children Squad actor does not miss out on any chance to show his love and gratefulness to his beloved mom and dad through his Instagram handle.

If you are a follower of the young talent's 'gram, you are probably familiar with frequent posts dedicated to his mom and dad. Maxwell Simkins posing with his father for a selfie (Source: Instagram)

On that note, one of the father-son bonding moments can be seen from his Father's day post of 2021. Uploading a joyous picture with his father, he expressed his love for his father through the caption that read, 'DAD, I Love you more than words can say. Happy Father's Day!!!!"

Likewise, his father's day Instagram dedication to his father also dates back to 2018, where he referred to him as 'the best dad in the world.'

The heartwarming family bond as seen on his social handle is undoubtedly a treat to thousands of his followers. Not only his father but his mother also often pops up on his Insta feed. Sending his love to his 'careful, loving and golden-hearted' mother on the auspicious occasion of Mother's day of 2018, the actor took his time to celebrate the special day, uploading an adorable mother-son picture on his 'gram.

Maxwell also has a younger brother, Olee, and shares an extremely close bond with him, as his online presence suggests.

Wishing his brother, whom he also refers to as his 'best friend,' on his ninth birthday in 2020, Maxwell dedicated a heart-melting 'gram post to his younger brother, sharing how thankful he is for his presence.

Maxwell's parents sure did a fantastic job raising him into a loving person. Although his mother and father have no background in the show biz, their incredible effort and support in building their child's career in acting is inspirational.

Making his television debut in 2014, appearing in The Tonight Show Starring Jimmy Fallon, Maxwell is now most noted for his performances in The Chicken Squad, A.P. Bio, The Mighty Ducks: Game Changers, and so on.

More so, judging his dedication and passion for his craft, he is sure to achieve more significant milestones in the coming days.