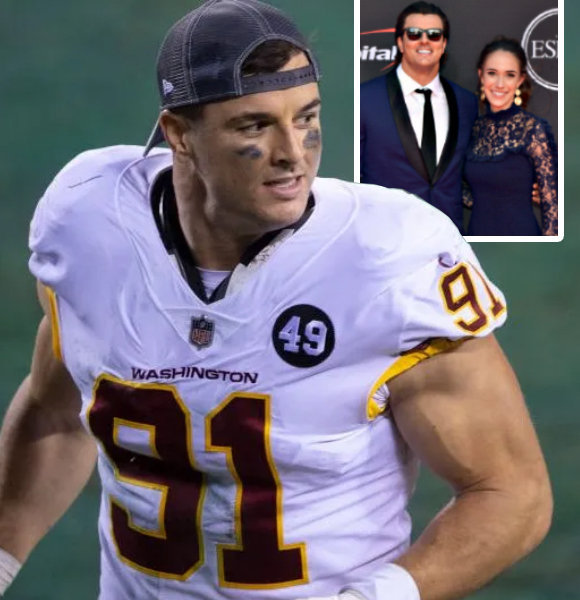 “2 years in with my favorite person,” says the Instagram anniversary post of NFL player Ryan Kerrigan dedicating the special day to his beloved wife.

As much as Ryan is fortunate to have acquired humongous success in his professional front, his smooth sailing marriage only adds to his prosperity. While he is known for his extraordinary gameplay out in the arena, his social media handle says a lot about his fulfilling family that is not much seen otherwise.

Ryan Kerrigan and His Wife

Ryan and his spouse, Jessica Mazura, began their beautiful journey together, taking their companionship a notch further, on January 28, 2017, when the athlete proposed to his beloved.

The love birds took their time with the marriage and exchanged their vows only after a year of engagement.

Making their wedding Instagram official, the two took to their respective social handles to share a few glimpses of their wedding day. Ryan Kerrigan and his wife on their wedding day (Source: Instagram)

More on - Ian Wright Regrets His Decision Regarding Marriages ? Why So?

Rayan’s ‘gram post of the very day displayed a warm gesture of love between the two as the newlyweds took to the dance floor after sharing the vows. At the same time, Jessica’s ‘gram upload displayed the couple’s joyous picture as they walked down the alter holding hands looking stunning in their gorgeous wedding attire.

The wedding ceremony held in Huntington Beach, California, was attended by numerous of their close friends and family. Not to mention, their lovely two pet dogs, Franklin and Kennedy, were also the stars of the event.

Their frequent appearances on each other’s social handles ever since their wedding, displaying the couple’s lovely moments, speaks volumes of happiness their share in their relationship.

Moreover, Ryan’s social media presence suggests that he began dating his wife as early as 2016 when he first introduced her to his Instagram followers. Since then, their swoon-worthy bond has taken over their social handles.

As 2021 marked the third year of their nuptials, Ryan could not hold back but scream out to the world his love for his spouse through his adorable anniversary ‘gram upload.

Over three years of their marriage, their happiness has only multiplied as parents to their adorable two daughters.

After a year into their marriage, Ryan and his wife became parents to their first daughter, Lincoln Georgie Kerrigan, born on March 6, 2019. Ryan Kerrigan with his partner and daughters (Source: Instagram)

Get to know - What Do We Know about Ezekiel Elliott's Parents?

While their firstborn added immense happiness and responsibility to the lives of the new parents, they welcomed their second daughter, Hayes Frankie Kerrigan, on September 30, 2020.

Proud to be parents to their two daughters, Ryan and his wife love to share their happy family moments through their socials.

Out of several of their standout family moments is the one Jessica uploaded on her Instagram on December 19, 2021. She a series of beautiful family portraits with their two little girls captured in Ashburn Farm. But, more so, the holiday special family picture radiated warmth they shared as a family.

While the 33-year-old’s career has taken off exponentially as one of the celebrated NFL athletes, his beautiful family of four, adding bliss to his life in every which way, is indeed what an ideal family would look like.