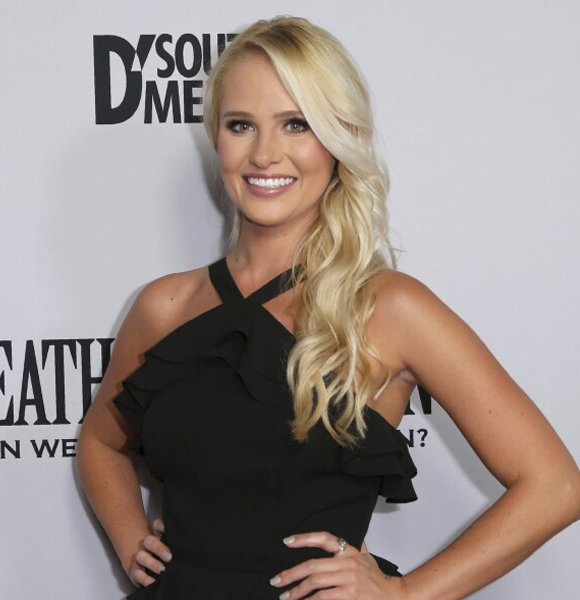 Tomi Lahren, an American conservative political commentator, and television presenter has succeeded in the industry with her ineffable contributions to the media line.

Her way of deliverance and presentation has always been up to the mark, but what her listeners also admire is her ethereal beauty that flaunts on-screen. Tomi’s astounding beauty has also lit up the rumors of her undergoing plastic surgery.

Recently, she has been quenched with multiple questions regarding the surgery.

Tomi has an aura and essence while making her appearance on the cameras. There’s something that just grasps the attention of any listener.

Her voice, with a soft tilt for sure, doesn’t fail to captivate her audience, but the beauty she has is a plus point that garners her with as much love and attention from the people worldwide.

However, regardless of her talent and outstanding performance on screen, a rumor of her undergoing plastic surgery has gone sporadic. Tomi hasn’t uttered a word about the rumors, nor has she given a response to any of the questions as such on social media.

However, the rumors lit up once her picture that was clicked back when she was thirteen years old went viral on social media.

That particular picture caught the eyes of her fans and critics as well. Gradually, a few of the critics started comparing her picture with her current appearance, which led them to raise several queries on the internet.

Several assumptions had started to hit the internet that kept on quenching Tomi with thousands of unwanted criticisms, trolling, and opinions. So, eventually, a website, Life & Style, took the question and reached out to Dr. Vartan Mardirossian. When asked about the surgery, he replied on how the differentiation could be a little complicated due to the changes in her lighting and makeup.

But, the doctor did comment on how she could have undergone a bit of rhinoplasty, leaving her nose thinner and a noticeable yet slight lift on her eyebrows. He added,

“The tip is refined, and she has a nice scoop on her nose that she did not have before.”

Also, he is not the only doctor who got skeptical regarding the TV presenter’s plastic surgery. Another specialist named Dr. Gregory Bufford mentioned how he could see numerous changes on her face.

The doctor opened up on how her lower lids were gone, leaving her eyes to look more open. Moreover, another point he made matched up a bit with Dr. Vartan as Bufford also noticed changes in Tomi’s eyebrows as they looked a little high.

He made a statement on how she could have injected a botox into her eyebrows. While hearing from these specialists, things were speculated to be true to some extent. Also, many of her posts circulated on Twitter while people compared her pre and post-surgery pictures.

Despite these many rumors social media circulations, the beauty seems to have stayed unbothered and hasn’t made a word for or against any of the topics. So, unless she doesn’t accept it by herself, her news regarding plastic surgery is false. And, even if she has, that doesn’t matter because she is beautiful either way.