By LRU Writer | On: February 18, 2020
Danny Etling is an American football player who plays for the Atlanta Falcons of the NFL...his parents are Joe and Gretchen Etling...his age is...studied and played football at Purdue University and LSU...was drafted into the NFL in 2018 by the New England Patriots...his height and weight are given below... 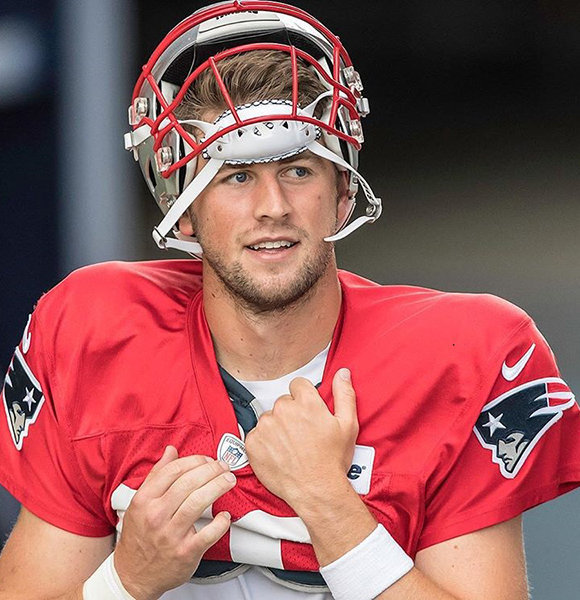 Danny Etling plays in the quarterback position for the Atlanta Falcons of the NFL. The Falcons signed him on the 14th of August 2019 following a claimed off waivers by them.

Before playing for the Falcons, Danny was in the roster of the New England Patriots. He was drafted 219th overall in the seventh round of the 2018 NFL Draft by the Patriots. He won the Super Bowl LIII with them in 2018 and also tried transitioning to the wide receiver position.

Danny’s parents are Joe Etling and Gretchen Etling. Joe is from Terre Haute, Indiana, and Gretchen is from Indianapolis, Indiana. Both Joe and Gretchen are lawyers.

Danny’s parents first met each other at Indiana University in the 1980s.

Danny attended the Terre Haute South Vigo High School in Terre Haute, Indiana. He played for the high school football team and gathered stats of 1,505 throwing yards and 11 touchdowns during his senior year.

After his high school graduation, he joined Purdue University; he committed to Purdue during his junior year in high school. He played for the Purdue Boilermakers in the 2013 and 2014 collegiate seasons. However, on the 11th of June 2015, he requested and was granted a release from his scholarship from Purdue.

Following his release, it was announced on the 22nd of June that same year that Danny would be joining Lousiana State Unversity (LSU). However, due to NCAA rules, he couldn’t play football right away and had to sit out the 2015 college football season.

All in all, he played 37 games during his collegiate football career, starting 35 of them. He played 13 games for Purdue University, and 24 for the LSU.

Danny earns a salary of around $495K in the Atlanta Falcons team according to Pro Football Reference.