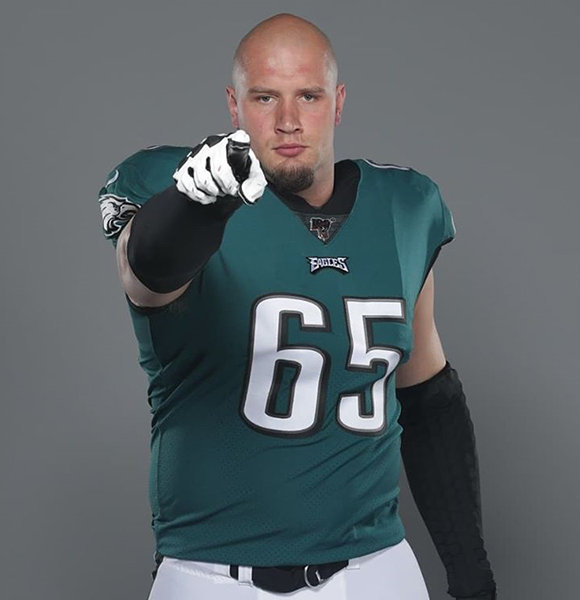 The offensive lineman of Eagles suffered an injury when Giants defensive lineman Leonard Williams hit quarterback Carson Wentz into the back of Johnson’s ankle. Lane immediately fell on the field and rolled in pain.

The injury happened four minutes before the end of the first half. Lane Johnson fell with serious pain.

Lane walked off the field with help and went into the medical tent. But later, he was declared questionable to return to the field.

His injury came just minutes after another Eagles star Alshon Jeffery fell down with a foot injury. With two injuries in a row, Eagles' fans were devastated at first. But, the team did come back with a win against the Giants at the end.

As for now, Lane does not seem to have suffered much, so he might be able to make his return on the next match.

Lane Johnson is one lucky guy when it comes to his love life.

Lane is happily married to the gorgeous Chelsea Layne. The couple met while they were both studying at the University of Oklahoma and eventually fell in love. They got married in January 2013, just three weeks after getting engaged.

Just like Lane, Chelsea is also from a sports background. During her college days, she was a high jumper and hurdler. Lane Johnson and his wife Chelsea Johnson on their wedding day (Photo: bleacherreport.net)

Further, the Johnson family is one happy family, and both Lane & Chelsea do not shy away from showing off their perfect family on social media.

Lane Johnson started playing football at a very young age. In his high school days, he played as a quarterback.

After high school, Lane played one year of college football as a quarterback at Kilgore College. Later, the athlete transferred to the University of Oklahoma and started experimenting in various positions, before eventually settling in as a tackle.

He finally made his NFL debut in 2013 after being picked fourth overall by the Philadelphia Eagles in the 2013 NFL Draft. Ever since, Lane Johnson has been a valuable player for the Eagles.

You May Be Interested:- Torrey Smith Retired, Contract, Career, Net Worth

Further, in November 2019, Eagles rewarded its star player by showering him with loads of money. The team signed Lane on a $72 million-worth, four-year contract. The new lucrative contract guarantees him $54 million, and the offensive lineman will be pocketing an annual salary of $18 million.