By LRU Writer | On: December 16, 2016
Michael Bradley is a professional soccer player and the captain of US Men's National Soccer Team. Born on July 31, 1987, Michael has played for renowned European clubs and currently plays in the Major League Soccer. Taking over the captaincy of the national team after a controversy, Michael Bradley continues to lead his team on and off the field. 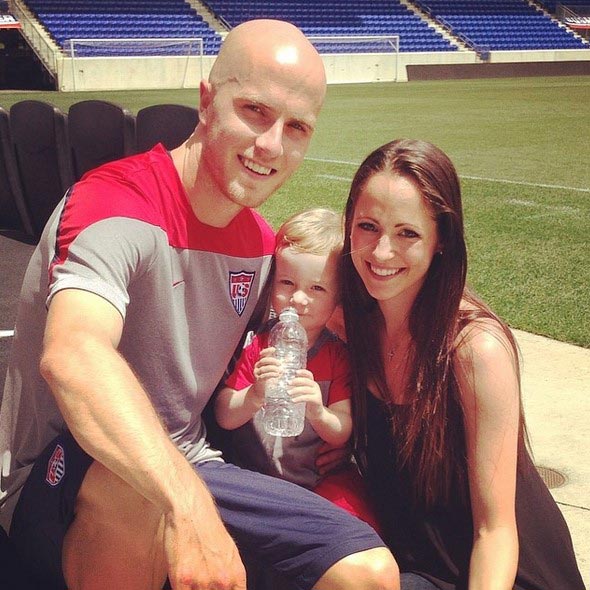 Michael Bradley is a professional soccer player and the captain of US Men's National Soccer Team. Born on July 31, 1987, Michael has played for famous European clubs and currently plays in the Major League Soccer. Taking over the captaincy of the national team after a controversy, Michael Bradley continues to lead his team on and off the field.

Michael showed his leadership and used soccer as a platform to show solidarity against the recent shooting in Orlando. Bradley wore a 'Rainbow colored' Captain's Armband during United States' Copa America quarter-final match against Ecuador.

Michael Sheehan Bradley was born in Princeton, New Jersey to mother  Lindsay Bradley and father Bob Bradley. His father is a soccer coach, and this inspired Michael to pursue a career in the game as well. He lived his early life in Pennington, New Jersey while his father was the coach of Princeton University. He moved to Palatine, Illinois as a teenager as his father coached MLS side Chicago Fire.

At the age of 15, he attended the US Under-17 Men's National Team Residency Program in Bradenton, Florida. He went to this facility, for four semesters between 2002 and 2004 to improve on his game.

During his playing career, Bradley played in the Netherlands, Germany, Italy, and England. Due to the stints in these countries, he speaks fluent Italian, Dutch, German and Spanish along it his native English.

Michael Bradley married to wife Amanda Barletta in 2011. Amber was a tennis player at the University of Rhode Island. They had dated for several years and lived together in Germany before getting married. After the wedding, the couple moved to Italy, where Michael was on contract with Italian Serie A side A.C. Chievo Verona and later at Rome-based club AS Roma. The couple currently resides in Toronto, Canada and have two children together. Their son Luca Bradley was born on September 30, 2012, and two years later on November 17, 2014, they welcomed their daughter Quinn Elle Bradley to the family.

Here is a picture of the Bradley family from Michael's Instagram:

Michael Bradley started his professional soccer career at the age of 16 after signing a Project-40 contract with MLS, which allows young football players early entry into the Major League Soccer without graduating from a college. He was picked up by the Metro Stars (known as New York Red Bulls since 2006) but did not play a single game in 2004 due to a foot injury. In 2005, He managed to play 32 games for the Metro Stars and scored his first and only goal for them in the last game of the regular season against Chivas USA.

The following season saw Michael move to Dutch club SC Heerenveen for a transfer fee of $250,000. He scored 18 goals in 69 appearances for Heerenveen before moving to German Bundesliga side Borussia Monchengladbach in August 2008. He stayed in Germany until 2011. He made 81 appearances for the Bundesliga outfit scoring 11 times. At the end of his contract at Monchengladbach, he joined English Premier League side Aston Villa on a 6-month loan deal.

His stay in England was not very productive as he played only four games for Aston Villa. At the beginning of the 2011-2012 season, Michael Bradley was picked up by Italian Serie A side Chievo Verona. He enjoyed an excellent season with Chievo where he played in 36 matches scoring one goal. His impressive performances got him noticed by the big teams. In 2012, he was bought for € 3.75 million by Serie A giants AS Roma on a 4-year contract.

Michael Bradley played 46 matches for the Rome-based-team and scored two goals during his time there. His stay in Italy was hampered by injuries so, In January 2014 he moved to MLS side Toronto FC. Michael is the captain of the team and has managed to play 62 matches and scored seven times for the Toronto MLS Franchise. In 2015, ahead of the CONCACAF Gold Cup, US National team coach Jurgen Klinsmann named Michael Bradley as the new national team captain. Bradley got the captain's armband after former captain Clint Dempsey had a falling out with a referee in a US Open Cup match. There has been much debate on why Bradley is still the national team captain as Dempsey is still in the team and a more natural leader. Since his debut in 2006, Michael has managed 121 senior international caps and scored an impressive 15 goals for his country.

Wrapping up 2017 with a memorable Loss

Bradley has been less than great regarding his performance in the past year. He has not been the same player he was in 2012/13. It seems he has lost a lot of his past prowess. The analyst has associated his poor performance with his sporadic changes in position amongst other reasons.

He’s been captaining Toronto FC for the past year and even reached the MLS Cup final against Seattle FC. The most iconic moment for him was when he messed up his penalty kick during the finals penalty shootout leading to Seattle’s victory.

Most considered his performance in the finals as one of the most fantastic forms he has had in the past year but the player himself has been remorseful about his shortcoming.

But Bradley seems to have found himself in this storm and has finally sprung back up starting with his comment on Instagram saying,

The pain and heartbreak of the last two days have made one thing very clear. I've never been more proud to call TFC my club and Toronto my home. Together our time will come.

It seems the 29-year-old soccer star is ready to make his comeback in the coming years.

Net Worth and Salary

Michael  Bradley has an estimated net worth of 13 million US Dollars. The soccer player earned most of his wealth through his salary. Between 2012 and 2014 he earned about €2 million playing for Italian side AS Roma. He then moved to the MLS where he earned US $5 million in his first season. This was increased to $6.5 million in 2015 and is expected to make the same amount this year. Michael is the 3rd highest paid player in the MLS after Brazilian maestro Kaka of Orlando City and Toronto FC team-mate Sebastian Giovinco.

Michael was a part of the United States men’s national soccer team alongside Jürgen Klinsmann, Jermaine Jones, and Clint Dimpsey. He currently is the captain of Toronto FC and leads famous personalities such as Jozy Altidore, Tosaint Ricketts, Jonathan Osorio and Benoît Cheyrou.

Michael is also the brand ambassador for sports equipment manufacturers Puma. He used his Instagram account to express his excitement when he joined the multi-national company.

At 28, Michael Bradley is in the prime of his soccer career and has many good years ahead. Even though he could not lead the USA to the Copa America title, losing to Argentina in the Semi-Finals, he can look forward to a promising career both domestically and Internationally.