By LRU Writer | On: July 07, 2019
Peyton Royce is talented and beautiful...is a professional...born in Australia she moved to...rose to fame in 2015 when a reputed establishment offered her a position as...engaged with a fellow co-worker...getting married on... 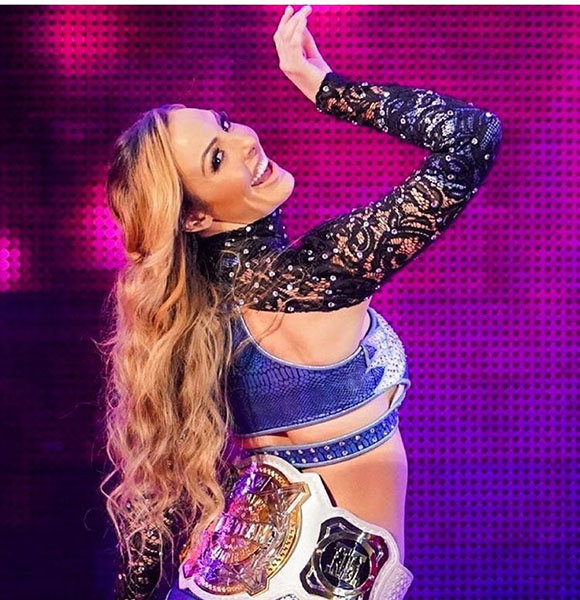 WWE superstar Peyton Royce wanted to be a dancer while growing up. But, she got fascinated with wrestling at the age of 9.

So, following her passion, Peyton took the path of wrestling as a career. And, on 15th of May 2015, she made her first televised in-ring debut for NXT. Ever since then, the star has grown with an unbelievable pace. She has even garnered a following of 1.2 Million on her Instagram.

Peyton's real name is Cassie McIntosh. She opted to use a stage name when she joined NXT.

The WWE superstar hails from the land of down under. She was born in the suburbs of Sydney, New South Wales, Australia in 1992. Peyton, who celebrates her birthday on the 10th of November, attended Westfields Sports High School.

She lived in Sydney with her older brother and parents as a child but later on, moved to Melbourne.

Her parents separated while her mother remarried. Peyton seems to be close to her stepfather like her biological father; she celebrated the Christmas of 2018 with her stepfather.

Also From Down Under:- Phoebe Tonkin Husband, Net Worth, Family

Being active as an athlete, it is no secret that she has maintained a perfect body figure — Peyton measures in at 36-24-35 inches.

Her diet and rigorous training also play a vital role in her fit. As for her other body measurements, the wrestler stands at the height of 5 feet 7 inches (1.7 m). She has a weight of 59.81 kgs that goes perfectly with her hourglass-like figure.

Who Is Peyton Dating? Getting Married?

Peyton is the crush for her thousand if not millions of fans, who fell in love with her quirky personality and over-the-top hair colors. However, sad news for her admirer, she has a boyfriend.

The man is none other than, WWE superstar, Tye Dillinger.

The rumors of Tye and Peyton dating were spewing in the locker rooms of WWE since 2015. However, the couple only came out public with their relationship in the year 2017. Although they kept their affair a secret at the start, the pair have been hinting their fans with some tib bit of information now and then. On the 19th of February 2019, Peyton shared a picture of her and her boyfriend to wish him a happy birthday. Along with the wish, she also surprised her fans with a ring on her finger, hinting that she got engaged.

Now, together for almost five years, the couple has finally decided to take the big step. They are set to tie the wedding knots on 25th of August 2019. It is believed that fellow superstars Billie Kay and Tyler Breeze are set to be the bridesmaid and groomsman.

Peyton has been in the wrestling universe for a decade. She stepped onto the ring for the first time on the 28th February 2009 as KC Cassidy, teaming up with Robbie Eagles in Pro Wrestling Women's Alliance.

Another Women In WWE :- Becky Lynch Can't Stay Single! New Boyfriend Already, Who Is He?

With a meteoric rise to fame, she received a tryout with WWE on August 2014. Impressed with her already polished craft in the ring, WWE announced her as their NXT trainee on the 13th of April 2015.

Going toe to toe in the ring with opponents for a decade, the superstar has successfully made herself a well-known contestant.

But, her contract with neither WWE nor NXT has been made public. Therefore, what the star takes home is not known. However, with the massive crowd she brings on every single appearance, Peyton is undoubtedly paid more than the average of $50K.