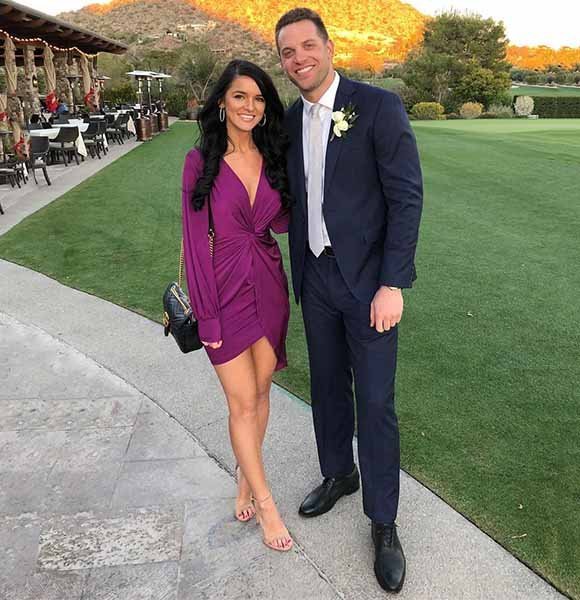 On 2nd June 2019, Adam Gottschalk announced being officially off the market. Via Twitter, the Bachelor Nation Alumn revealed that he and his girlfriend Raven Gates got engaged on 31st May 2019. The duo did so in Dallas, Texas.

The newly-engaged couple shared images from the proposal through their respective social media accounts.

Taking to Instagram, Raven professed excitement over the prospect of waking up next to her future husband every morning. Adam, meanwhile, merely tweeted the date of the engagement day.

How Adam Got Engaged To Raven Gates? Speaking exclusively to E! News afterward, Adam provided a scoop into the elaborate proposal. On the day that he popped the big question, his now-fiancee Raven was doing a photo shoot for her online boutique.

To celebrate the engagement, he and his wife-to-be with their family and friends for dinner. The next day, the soon-to-be-married couple traveled to the Botanical Garden.

Adam met his girlfriend-turned-fiancee Raven during the filming of season four of Bachelor In Paradise. Aired in 2017, the installment of the popular Bachelor franchise saw the lovebirds ignite romance and flourish with every passing day.

Back in January 2019, Adam hinted marriage plans during an appearance on Off The Vine podcast, saying that it was coming soon. Admittedly, he and Raven needed to work out a wedding that would suit their respective religions.

The Bachelor In Paradise is of Jewish faith while his fiancee Raven follows Christianity as her religion. An Aries by birth sign, he celebrates his birthday on 19th April every calendar year.

Born in California in 1990, 29-year-old Tom comes from a family of five. Along with his two siblings Will and Ben (an NFL player), he grew up in the tender love and care of parents: Bill and Patricia. His father is a dentist while his mother works as a nurse anesthetist.

Net Worth Plus Job Details

In 2012, Tom graduated from the University of Arizona with a Bachelor's degree in Regional Development, Entrepreneurship, and Business Management.

Leaving behind his NFL aspirations, he began working as the operations/events coordinator at The Miken Insitute. Per the job description, he oversaw various production elements, and negotiate & deliver cost saving budgets.

Tom left The Milken Institute after a year-long stay in July 2013. Later that year, he enhanced his career by joining Marcus and Millichap as its commercial agent.

Through his job as a renowned real estate agent and STRIVE's vice president, Tom probably earns a seven-figure salary, which constitutes his multi-million net worth.